The Judo Family United Around its Values

Written by Nicolas Messner on 04. Oct 2022
Photographs by Gabriela Sabau
Share
In less than two days, the World Judo Championships will begin in Tashkent, Uzbekistan. As preparations for the event are well underway, the Executive Committee of the International Judo Federation met today in the Uzbek capital to discuss the present and future of judo at world level. 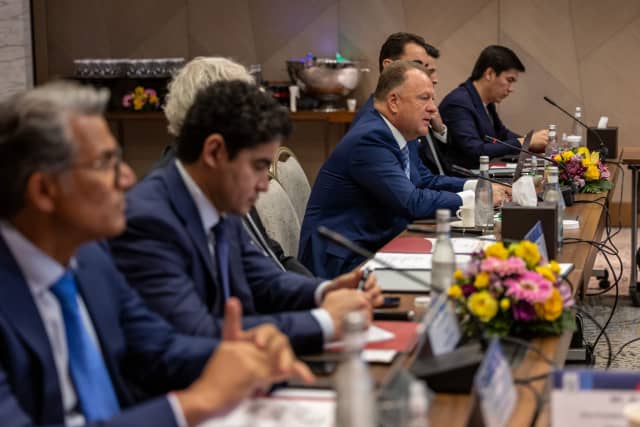 In the introduction, the IJF President, Mr Marius Vizer, addressed the members of the executive committee, "Dear colleagues, welcome to Tashkent. It is a great pleasure for all our team to be here and to soon see the best athletes in the world, competing in good health and spirit. I want to thank the organisers for all the work done so far and I wish them good luck for the days to come. Thank you to all the organisers, including the federation, the National Olympic Committee, the governments and the sponsors.

I believe that these world championships are a great opportunity to promote Uzbekistan, not only on Uzbek territory, but also worldwide. Together we are going to promote the judo values such as friendship, unity and peace. I am sure it will be a successful event. To show our unity, I am pleased to welcome to our meeting, the President of the Uzbek Judo Federation, Mr. Azizjon Kamilov, the Secretary General of the Uzbek NOC, Mr Oybek Kasimov and the CEO of our sponsor and partner, Mr Max-Hervé George."

Mr. Azizjon Kamilov said, "On behalf of our federation, I am really happy to welcome you here in Tashkent. We are really grateful to Mr Vizer for having given us the possibility to organise the World Championships. We have created the best conditions to welcome all the delegations. I wish everyone good luck and to really feel like they are at home".

Mr Oybek Kasimov added, "We are really good friends with the International Judo Federation, thanks to the leadership of President Vizer,m. I am sure that we will deliver the best event possible, at the highest level."

Before the start of the presentations of the Executive Committee members, Mr Max-Hervé George concluded, "It is an honour and a pleasure to meet all of you here. My life has been driven by values and principles. I have the feeling that it fits perfectly with the judo values. I am very happy that together with the IJF, Ultima has the possibility to keep developing a common vision of the future of the youth, to offer them a better future." 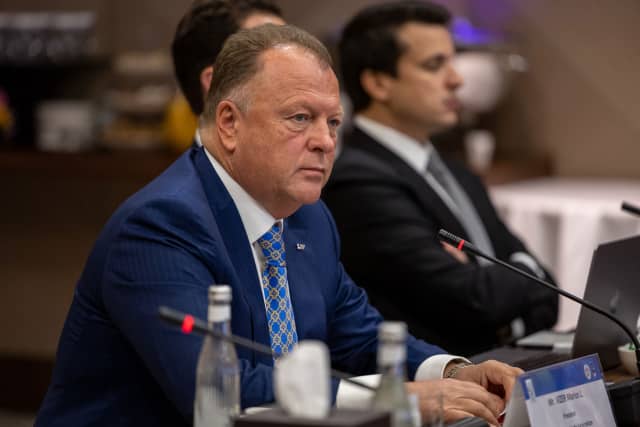 Following this introduction, rich in fine words and encouragement, the work of the Executive Committee could begin. After the approval of the minutes of the previous meeting, the interventions followed one another, showing how united the judo family is.

Mr Vizer continued, "We will keep supporting athletes from all over the world who don't have the chance to have full support otherwise, so they can pursue their dreams. I am pleased with the new positive evaluation of good governance, which put the International Judo Federation at the top of the list of international federations."

Mr Vlad Marinescu, IJF Director General, then explained the different sectors in which the IJF is not having only a leading role, but is a pioneer. "We are exploring every possible new way to activate the youth around judo and our values. For instance, we are launching a new project with Minecraft. After the Budokan and its two million unique players, we will focus on the Kodokan. We are also launching a new Judo TV premium, while our media system is constantly developing. The IJF is the largest growing federation on social media with a growth of 27%.

Mr Jean-Luc Rougé, IJF Secretary General, detailed the IJF programme from an administrative point of view, while Mr Nasser Al Tamimi, IJF General Treasurer, presented the financial situation of the organisation, which is clearly showing that, despite all the difficulties faced by the world over the past two years, the IJF has remained on the right track.

It was then the turn of the different continental unions to present their respective activities, demonstrating that in the wake of the IJF, all continents continued to work hard for the development of the sport. 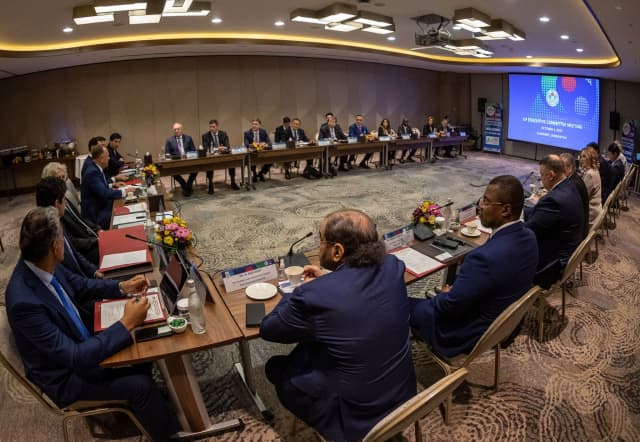 Dr Laszlo Toth, newly elected President of the European Judo Union, was welcomed warmly by the EC members. Dr Toth said, "I am happy to be welcomed within the Executive Committee. It's a really great honour to be part of this family, not only as a guest. Thank you Marius for trusting me and my team. On 17th June 49 countries out of 51 were present for the election. I want to say that we are members of the IJF family and as such we will do everything in our power to support the development of judo in Europe and in the world. We want to follow the leadership of the IJF. We are simply happy to work together. I am sure this will be fruitful and successful. Judo is not only a sport, we are a big family."

Siteny Randrianasolo-Niaiko, President of the African Judo Union, underlined the hard work done by his team since his election and the desire of the organisation to respect every single judoka, to reach the highest standards. Mr Obaid Al-Anzi, President of the Judo Union Asia, presented an extensive programme of events that were held in the continent, which was not stopped by the global pandemic.

In Panamerica, Continental President Carlos Zegarra Presser, underlined the highlights of the year, where numerous events, including a successful continental event, organised jointly with the Oceania Judo Union in Lima, Peru, and the Junior World Championships, held in Guayaquil, Ecuador, were true successes.

Before, the reports of the other commissions, Mr Vizer once again noted how the IJF was actively supporting judoka from Ukraine, from top level athletes to young children, more than 600 of them having been welcomed in Romania and Hungary.

Mr Vladimir Barta and Dr Lisa Allan, from the Sport Commission, explained that for the first time the world championships will be held on two tatami only. "We had to adapt the operation mode a little but it will be amazing to follow" said Mr Barta. Dr Allan explained that over the past months, the IJF community had been very respectful of all the covid protocols and this is one of the reasons why judo was successful in keeping its momentum. 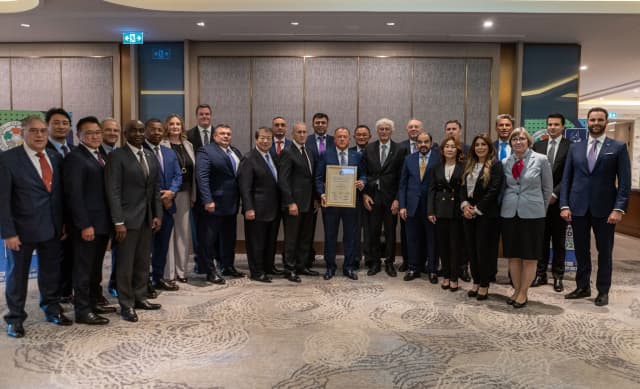 Mr Florin Daniel Lascau, in the name of the Refereeing Directors, said, "There is only one judo around the world and this is our goal, to keep it that way from a refereeing rules perspective. We are doing our utmost to provide good refereeing from the cadets to the seniors, for the veterans or for the visually impaired competitors. Our mission is to implement and explain the twelve points of the modified refereeing rules and to prepare the next generation of referees. We also want to guarantee the neutrality of refereeing."

To highlight this, Mr Vizer said, "Judo was offered to us by Professor Jigoro Kano, by the Kodokan and by Japan. It's our mission to work together to make it understandable for everyone, to benefit humanity."

Mr Mohamed Meridja, IJF Education and Coaching Director, explained that his commission was working tirelessly to implement new ideas and concepts to help athletes and coaches. 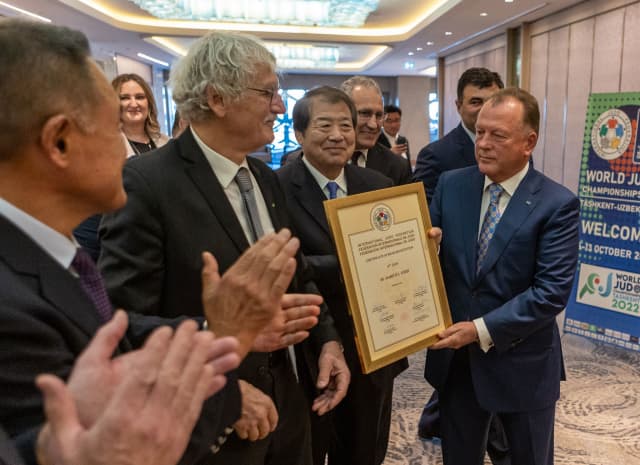 It must be said that the meeting was very positive and intense. To conclude the working session, Mr Jean-Luc Rougé, took the floor for a special announcement, "In judo there are merits and medals which are awarded for different kinds of performances. There is also a dan grade system that is the mirror of what you do and have done for judo, for society and for the world, for peace and friendship. This is the way our president, Marius, has been working for so many years. I can say that he is first of all neutral and therefore represents all of us. I asked among the members of the Executive Committee and we all agreed to present Marius with the IJF eighth dan. In the name of the Executive Committee, It's my pleasure to present, with all of us together, this more than deserved grade."

With visible emotion, President Vizer accepted the eighth dan, because it was "coming from the judo family." As we said, the meeting was intense and very positive. A lot has been done and there is more to come, especially in the upcoming days. On Wednesday 5th October, the IJF Economic Forum will be followed by the official draw of the World Championships and it will be time to enjoy beautiful judo, with family.