Written by Nicolas Messner, Jo Crowley on 22. Dec 2022
Photographs by Emanuele Di Feliciantonio, Tamara Kulumbegashvili
Share
After the Japanese demonstration at the last Grand Slam in Tokyo and with the presence of two Japanese in the draw, we expected something from the athletes from the land of the rising sun but both Kentaro Iida and Aaron Wolf, the reigning Olympic champion, could not extricate themselves from the tricky first rounds against athletes, it must be admitted, who are also big names on the world circuit. The former was defeated by number one seed Michael Korrel (NED), while the latter lost to former world champion Asley Gonzales (ROU). 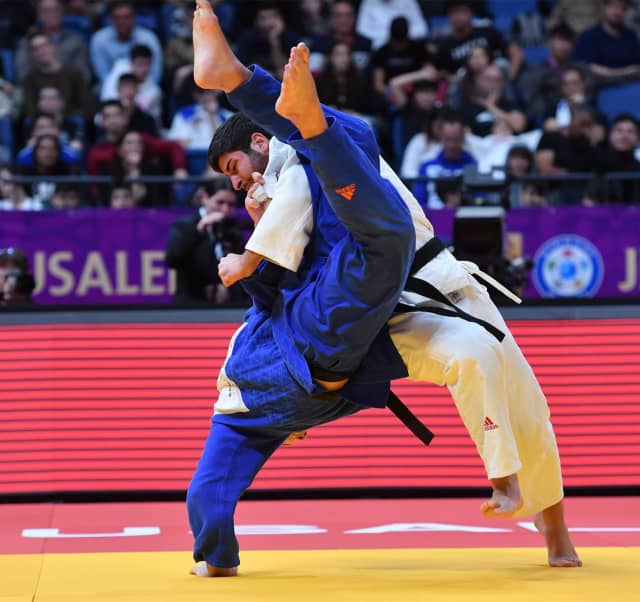 Korrel could therefore see the approaching semi-final but before that he had to face Dzhafar Kostoev (UAE) who turned out to be much tougher than expected and who ended up reducing the Dutchman's hopes to ashes. Kostoev, in a somewhat offbeat rhythm, also spent his morning sending his opponents to the four corners of the tatami, in a style that was both explosive and opportunistic with the most beautiful effect. In the semi-final, Kostoev faced Ilia Sulamanidze (GEO). The Georgian judoka took advantage of the fatigue of his opponent and propelled himself into the final. 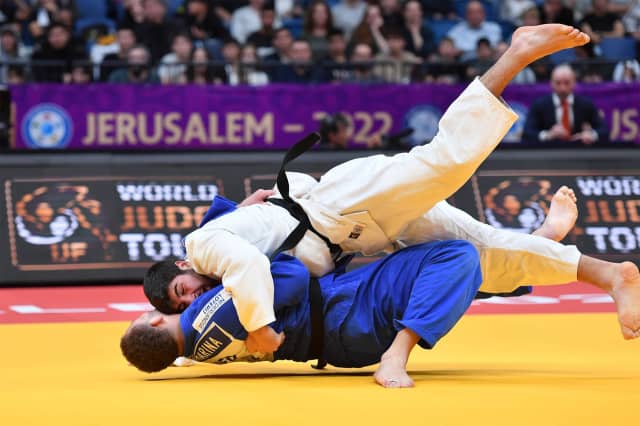 With the cards being redistributed in the second part of the draw following the elimination of the Olympic champion, but also the departure of Shady Elnahas (CAN), Nikoloz Sherazadashvili (ESP) and Zelym Kotsoiev (AZE), the semi-final opposed former world bronze medallist Toma Nikiforov (BEL) and Simeon Catharina (NED), the latter taking advantage over Nikiforov to fly to the final to face Sulamanidze. 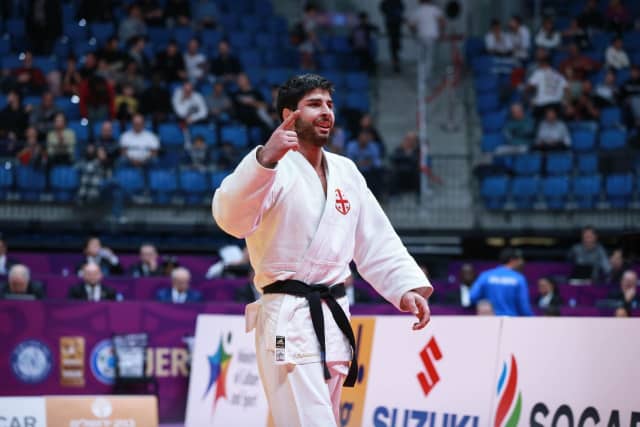 It must be said that the preliminary rounds were spectacular, with an impressive number of positive scores and big throws and that the atmosphere was incredible. At one point it was quite difficult to see who the public was supporting. Was it Raz Hershko (ISR) at +78kg? Or was it Li Kochman (ISR) at -90kg? For sure, Peter Paltchik was responsible of some of the cheering and he was very close to reaching the semi-final. Defeated by Sulamanidze, he made the public explode with joy after his victory against Korrel in the repechage. The atmosphere promised to be explosive again for his bronze medal contest against Nikiforov.

The final of Ilia Sulamanidze (GEO) and Simeon Catharina (NED) started with a first sasae-tsurikomi-ashi action from Catharina but for no score. This was more or less the most dangerous action from Catharina, who suffered against Sulamanidze and was penalised three times within the normal time and the golden score period. It was gold for Sulamanidze. Already junior world champion and youth Olympic silver medallist, the young Georgian competitor starts, step by step, to add lines on his senior prize list. This is probably only the beginning. 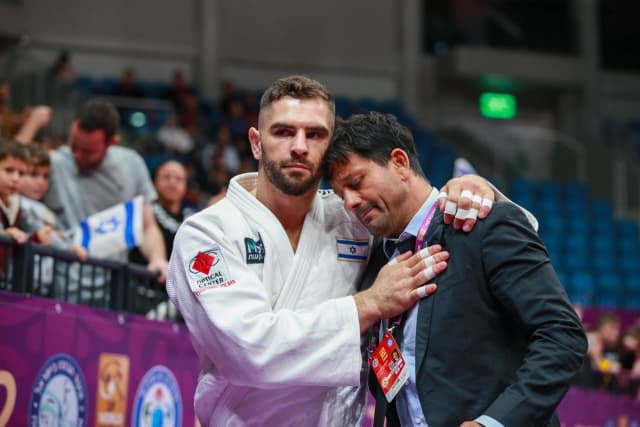 With the whole arena behind him, Paltchik took a psychological advantage over Nikiforov and pushed him on to the floor but could not conclude. He was then penalised for passivity, as Nikiforov didn't seem bothered by the public. With a massive left-handed o-soto-gari for waza-ari, Paltchik took a strong lead and aimed at the first bronze medal of the category. 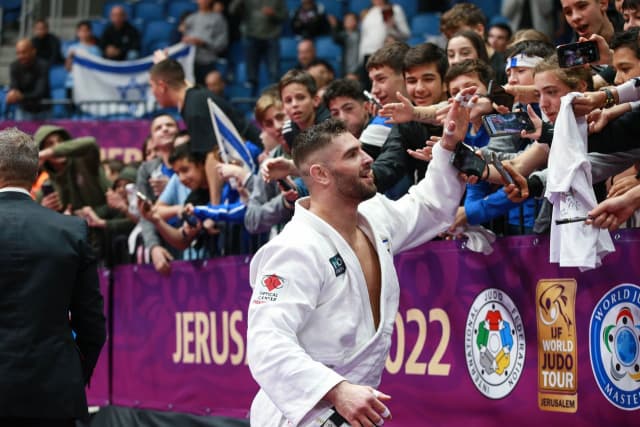 That lead was threatened by a second penalty and it then became a very tactical match. However, Nikiforov was penalised three times in a raw for passivity and avoiding the grip. The audience was thrilled and they had good reason to be, their hero stepping on to the podium of the Masters for the second time. But let's face the truth, at home it always has a different taste.

In the other bronze medal contest, Zelym Kotsoiev faced Dzhafar Kostoev in a battle of strong men. Kostoev was the first to score a waza-ari but it was then the turn of Kotsoiev to go for the equaliser. As he seemed totally exhausted after a tough day in the office, Kostoev didn't pay attention to the turn Kotsoiev engaged on the floor and suddenly found himself being pinned down for ippon. It was a bronze medal for Zelym Kotsoiev (UZB). 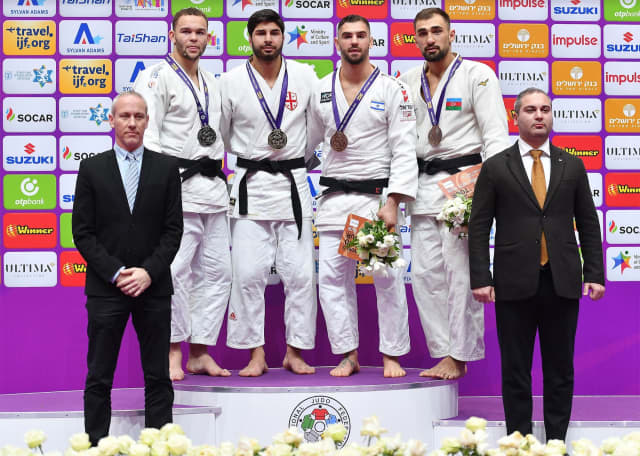 Medals, cheques and flowers were presented by Mr Hili TROPPER, Minister of Culture and Sports of the State of Israel and Mr Giorgi ATABEGASHVILI, President of the Georgian Judo Federation 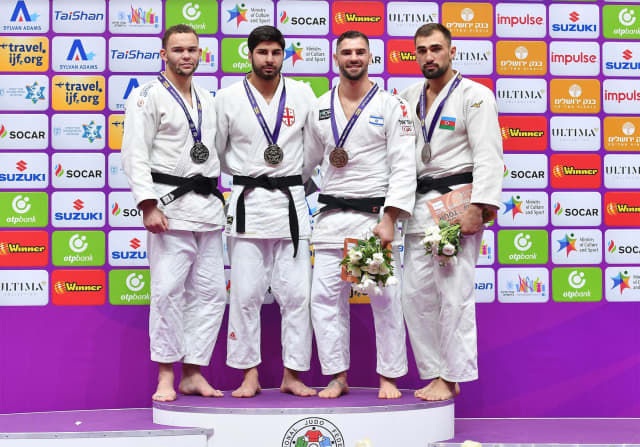