-78kg: How Many World Champions Can Bellandi Beat in One Day?

Written by Jo Crowley on 22. Dec 2022
Photographs by Emanuele Di Feliciantonio, Tamara Kulumbegashvili
Share
The first round contest between recent world bronze medallist Ukrainian teenager Lytvynenko and Kosovo’s Kuka was a hard fought match with a waza-ari being scored for the Ukrainian in the last minute. Their left against right stances and grips offered much for those inclined to study such things, a contest worthy of archiving to show to cadets, the stars of the future. 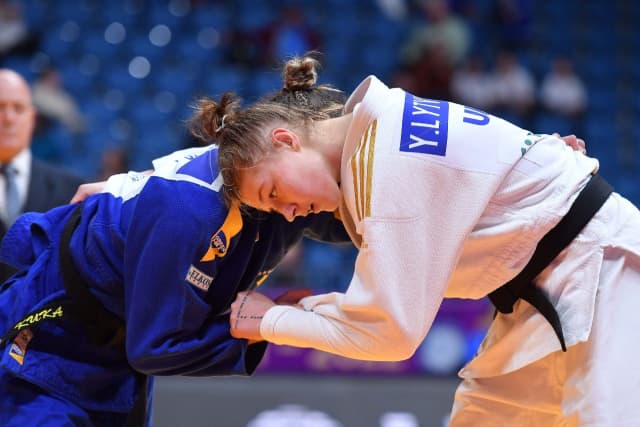 Lytvynenko’s win put her into a round two contest with Malonga, arguably one of the most formidable competitors in the category, a double world medallist, including a title taken in the Budokan in 2019. She wasn’t strong enough to pass the Frenchwoman but beyond that contest, Malonga too was beaten to the line in a semi-final against the Italian powerhouse Alice Bellandi (ITA). Bellandi attacked with a seoi-otoshi from the ends of the sleeves and Malonga rebounded in a desperate effort to avoid going over but in doing so she fell off the wrong side directly on to her back. 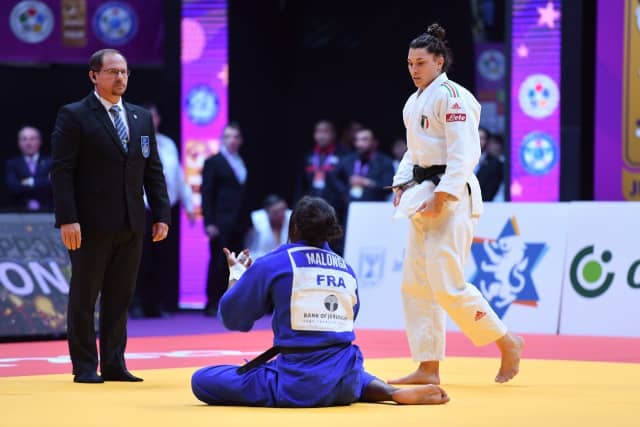 Elsewhere, back at the top of the draw, round 2 was hot. 2021 world champion and current world number 1 Anna-Maria Wagner (GER) and double Olympic medallist, 3 time world medallist and 2011 world champion Tcheumeo (FRA) had entered the arena. Should we tip the wink to the 26 year old or the 32 year old? Well it was the robust confidence of Tcheumeo that won out, with a throw for waza-ari and an unwillingness to reduce the pressure. 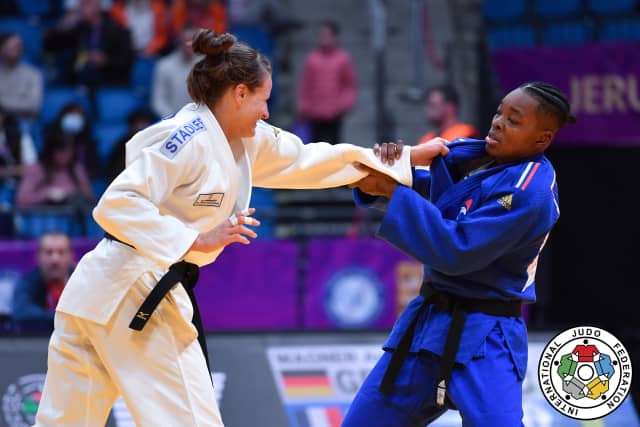 Further down the sheet Israel’s Lanir had Takayama (JPN) to contend with, perhaps not yet a superstar of Japanese judo but with significant wins under her belt. She won in Tokyo just a few weeks ago and has a string of medals from a few years ago. It didn’t go well for Lanir and then Takayama made sure it didn’t go well for Steenhuis (NED) either. 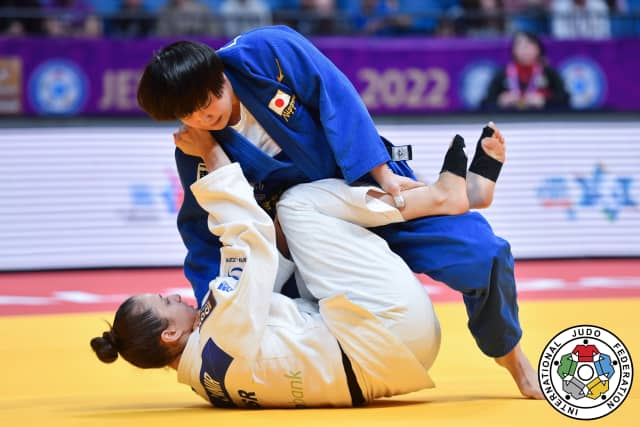 Bellandi, coming out on top of Sampaio (POR) and the current world champion Aguiar (BRA) before her win against Malonga, joined a rejuvenated veteran in the final in the shape of Audrey Tcheumeo, who should never be counted out. She beat Takayama (JPN) in the semi-final, in a cascading day of horrors for the Japanese team. 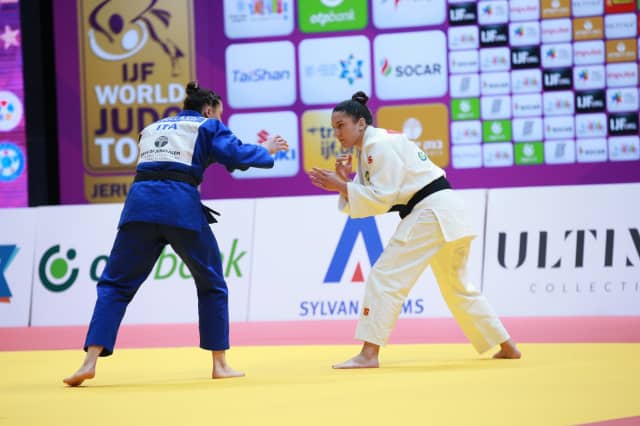 In the first bronze medal contest, between Steenhuis and Malonga, there was a back and forth of uchi-mata, sukashi attempts, strong gripping and also some playing with the shido rules, such as taking the contest to the edge of the area in order to gain an advantage. The Dutch fighter took the win and the medal, 3 penalties to two but it was an exciting few minutes that kept everyone on the edge of their seats. 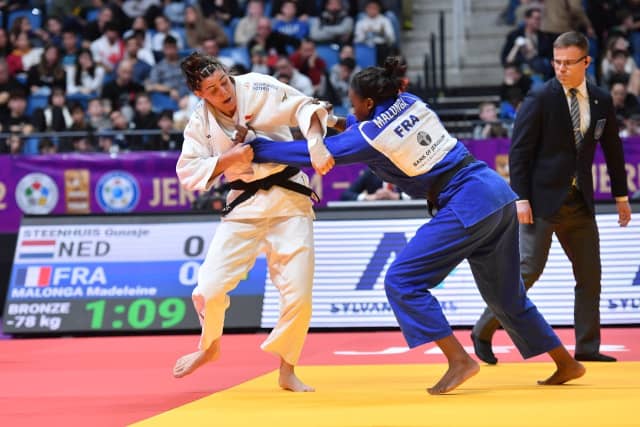 The second medal fight saw Aguiar and her red back patch go up against Takayama and the red was superior to the blue! The 31 year old Brazilian has been back at her best level after a period of injury and has medalled at her last 6 appearances, including becoming world champion again, in Tashkent just two months ago. There seems to be no stopping her! 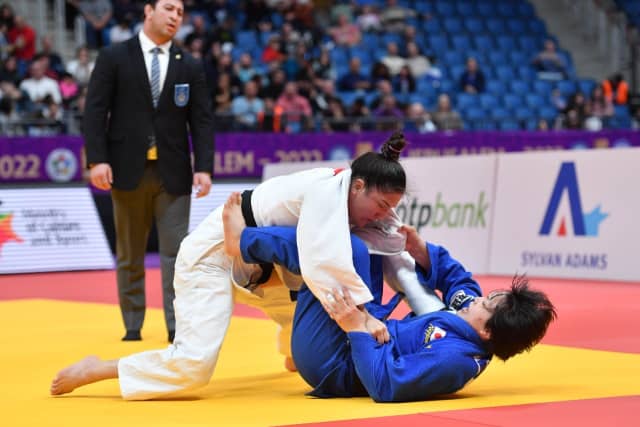 Tcheumeo and Bellandi’s final began with a reluctance to allow each other to grip. We can’t really blame them, with both being so explosive and dangerous. By the two minute mark they were at two shido apiece but at that moment Bellandi hooked in with an osoto-otoshi and pressured her grip downward to ensure the waza-ari was given. She held the score until the end and even tried hard to score again. 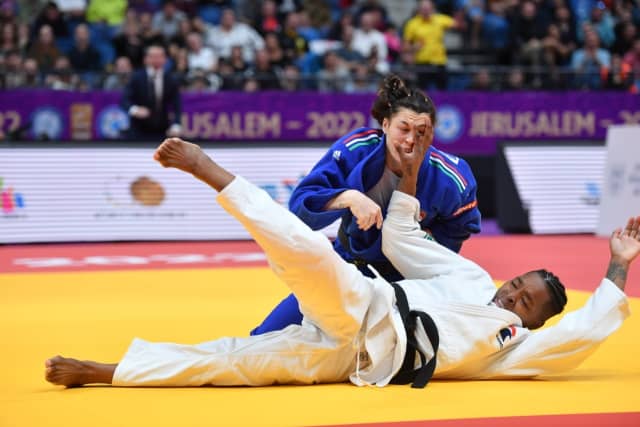 The answer to the original question is 3! Alice Bellandi can beat three world champions in one day. Now that is something to write home about. 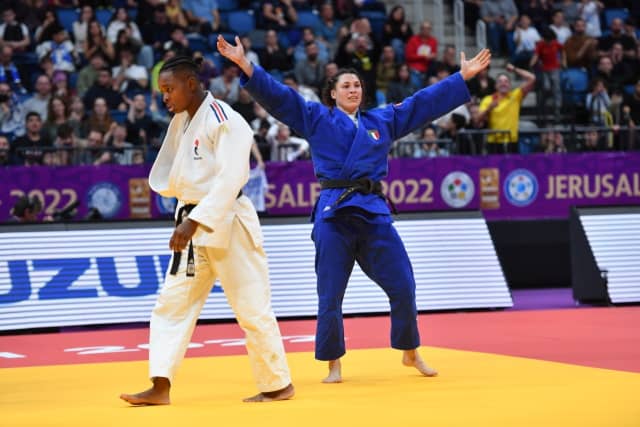 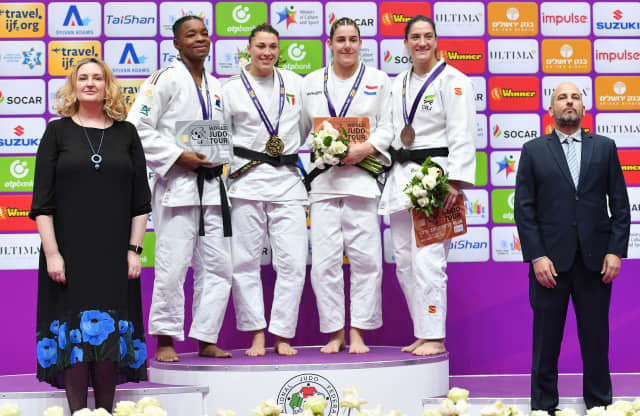 Medals, cheques and flowers presented by Executive Committee member of the IJF Dr Lisa Allan and Chief of Staff to the Minister of Culture and Sports of Israel Mr Guy Gutman 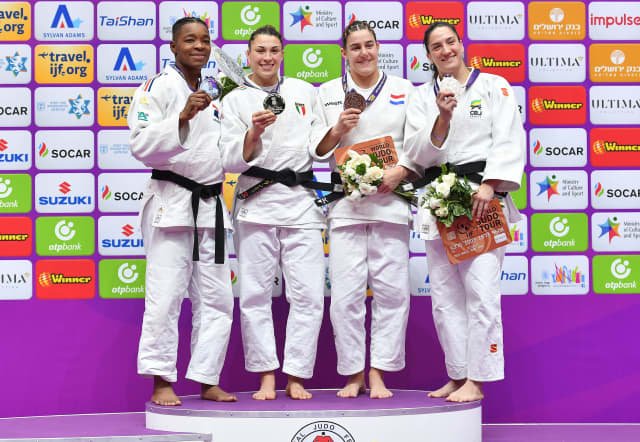