Written by Nicolas Messner on 25. Sep 2021
Photographs by Gabriela Sabau
Share
Four new categories were in action on the second day of the Zagreb Grand Prix in Croatia. While the first day saw a wave of youth sweep across Arena Zagreb, as the medallists’ average age was 24.3 years, all observers were waiting to know if the trend would be confirmed in the men -73kg and - 81kg and women -63kg and -70kg. It was the case, with the average age of the medallists being even lower, at 23.1 years, on day 2. 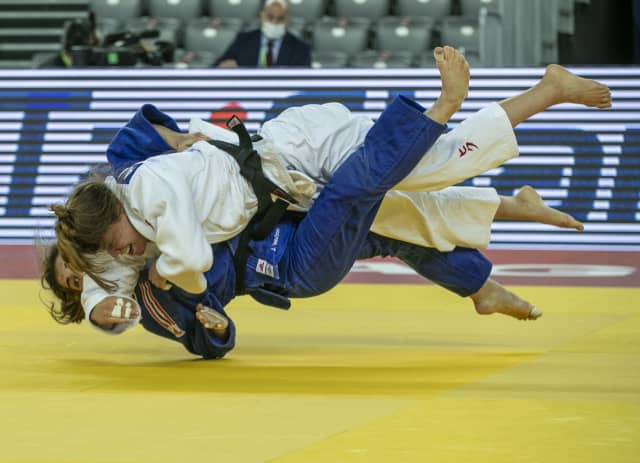 Another question that arose was whether France, which for the first time sent athletes selected by their respective clubs, despite competing under the colours of the country, would dominate the debates as they did in the lightweight categories. They won two women’s titles, including enjoying a 100% French final and they also took two medals in the men’s groups. This was not true today as France placed only one man in the final block, while other nations shone, like the United Kingdom, Slovenia and Moldova.

These were not the only questions though. This second day was also a day of redemption for some athletes who had strong world and Olympic hopes a few months ago. Unfortunately for them their hopes were disassembled by the reality of the tatami. This was the case for Hidayat Heydarov (AZE), junior world champion in 2017, two times world bronze medallist and a European champion too. Perhaps it is even clearer for the case of Tato Grigalashvili (GEO), who everyone saw as a serious contender for the Olympic title in Tokyo, but who completely missed the rendezvous. The two competitors answered the questions nicely by reaching their respective finals.

Being the two highest seeded athletes of the category, Andreja LESKI (SLO), silver medallist from the last world championships, and Geke VAN DEN BERG (NED), with a record of two grand prix medals so far, reached the final without facing too many problems. After a first match against Annabelle WINZIG (GER), who was a serious contender, LESKI won two more bouts by ippon, while VAN DEN BERG won all her preliminary rounds before full time. 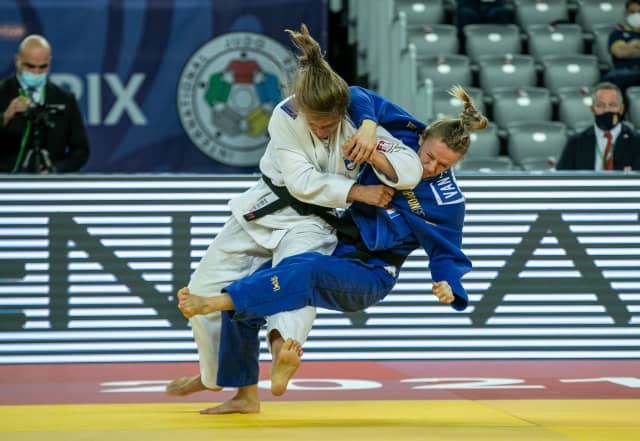 Most of the final was a strong opposition of guard between the two judoka, VAN DEN BERG looking stronger than LESKI, but the Slovenian was stable and didn't fear being under pressure. As the match approached its end, LESKI cleverly went for a hip movement before changing direction within a blink of an eye to dive under the centre of gravity of her opponent for a sumi-gaeshi for waza-ari and a second gold medal in a grand prix. 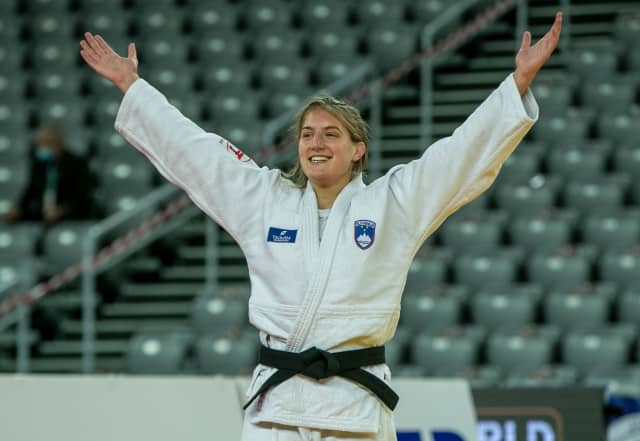 Israel is another team that counts on the World Judo Tour with the team having won a bronze medal in the first Olympic mixed team event in Tokyo. Thus seeing new Israeli names is always interesting, to discover who might be their future stars. Of course Inbal SHEMESH is not totally unknown, with her three grand prix medals prior to the Zagreb Grand Prix. She reached the bronze medal contest and faced Renata ZACHOVA (CZE), the 2020 junior European champion, for a place on the podium. After little more than a minute, ZACHOVA took a strong lead with a waza-ari from a low counterattack, but a few seconds later, SHEMESH scored back with a left-handed ippon-seoi-nage. It was then time for golden score! It is after 5'16 that ZACHOVA eventually scored a second waza-ari as SHEMESH was trying to take a top grip, with a left-handed uchi-mata, to win her best medal in a grand prix to date.

Only 20 years old, Laura FAZLIU is another new member of the powerful Kosovan team, who might shine in the future. She reached the bronze medal contest against Angelika SZYMANSKA (POL), an u23 European medallist in 2020. FAZLIU never really looked under threat from her opponent and after a few uchi-mata attempts, she deployed her aerial move to score ippon and win a well deserved medal. 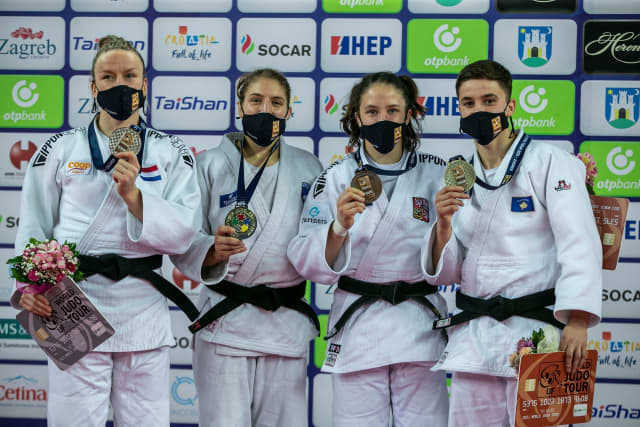 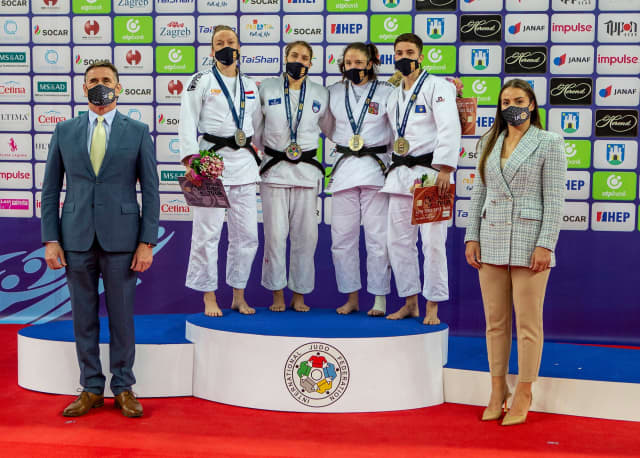 Being 11th on the World Ranking List and top seed here in Zagreb, Victor STERPU (MDA) is not a surprise. He reached the final of the category after defeating Jeroen CASSE (BEL), Ayub KHAZHALIEV (RUS) and then Mark HRISTOV (BEL) in the semi-final. In the second half of the draw, Hidayat HEYDAROV had to work hard to also reach the final after four intense matches. His 47th place in the world is not representative of the talent of the 24 year old athlete from Azerbaijan. There is no doubt that a competition like Zagreb is always good to get some confidence back. 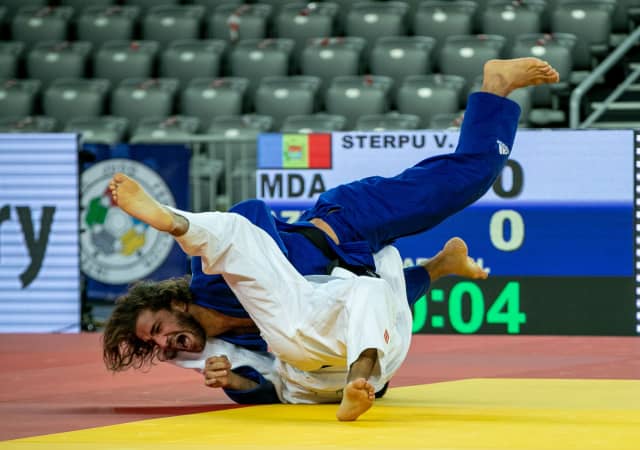 3'57 of the 4 minutes of allotted time were necessary for HEYDAROV to find a tiny opportunity, after what looked like a dance between the two athletes and it could have gone either way. Ultimately it was the Azerbaijani champion who scored a liberating ippon. 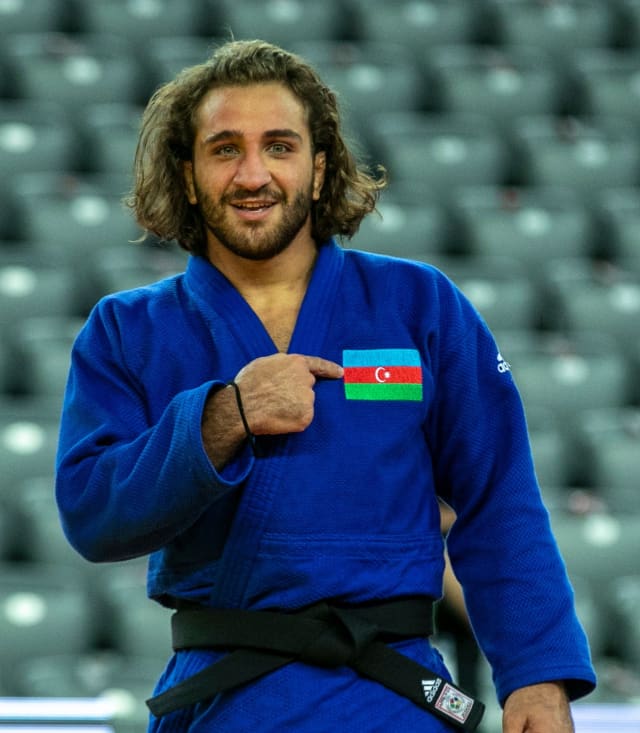 The second bronze medal contest saw Alexandru RAICU (ROU), winner of the Tel Aviv Grand Slam earlier this season and Mark HRISTOV (BUL), a silver medallist at the 2017 Cadet World Championships in Santiago de Chile. It didn't seem immediately clear why Mark HRISTOV was awarded ippon but the video refereeing was indisputable. As RAICU was trying to apply a sacrifice technique, HRISTOV engaged his leg inside and score with an o-uchi-gari. This is the first medal for the Bulgarian judoka, at this level. 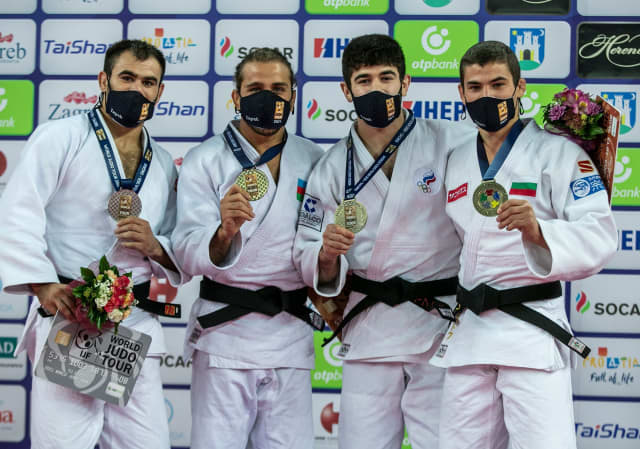 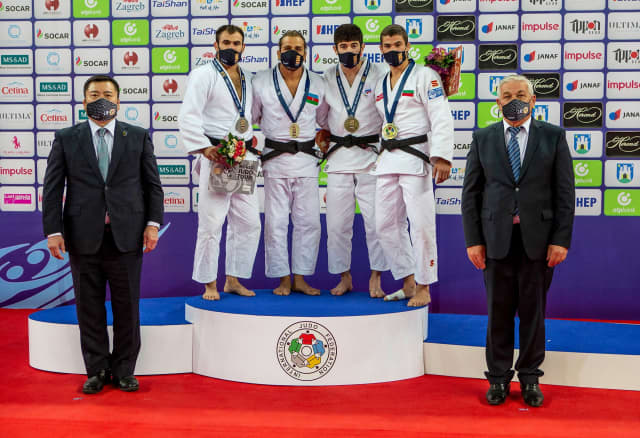 It is a well known feature that being a top seeded athlete is not a 100% guarantee to reach the final, but it helps a lot and this is what happened to Anka POGACNIK (SLO), a five-time grand prix medallist prior to Zagreb. With no record on the World Judo Tour, Kelly PETERSEN-POLLARD (GBR) was not scared to be an underdog. She also reached the final to open her prize list at that level. 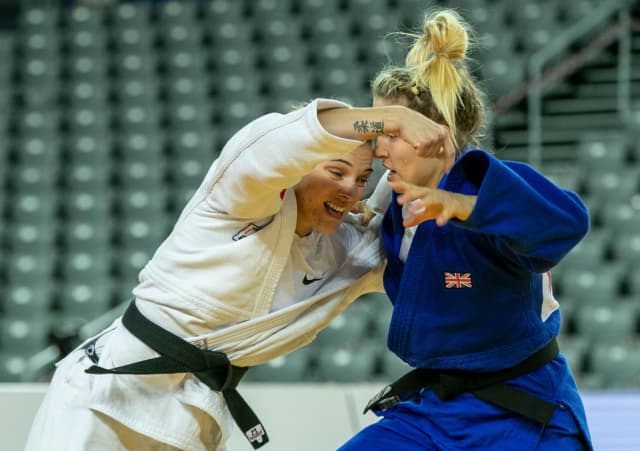 PETERSEN-POLLARD began the final bravely and was not afraid of the top seeding position of her opponent. After four minutes, as nothing was logged on the scoreboard, the golden score period started and again the British athlete launched several strong attacks. The last was not prepared enough and because of a potentially dangerous control on her opponent’s arm, PETERSEN-POLLARD was disqualified, offering the gold to POGACNIK for the second time in her career.

Great Britain was on fire in the category, as a second athlete competing with the Union Jack sewn on her judogi reached the final block. Katie-Jemina YEATS-BROWN (GBR) was opposed to Alina LENGWEILER (SUI) for a place on the podium, to join her teammate, but this did not happen as YEATS-BROWN was thrown twice for waza-ari, her attacks and counterattacks clearly lacking control and therefore offering opportunities to the Swiss judoka, which she didn't let go of.

In the second bronze medal contest, 2017 u23 European champion, Hilde JAGER (NED) met with Katarzyna SOBIERAJSKA (POL), to guarantee a first medal in a grand prix for one of them. This turned out to be for SOBIERAJSKA, as the Polish competitor opportunistically scored after a few seconds in the golden score period, with a right-handed classic ippon-seoi-nage from her knees. 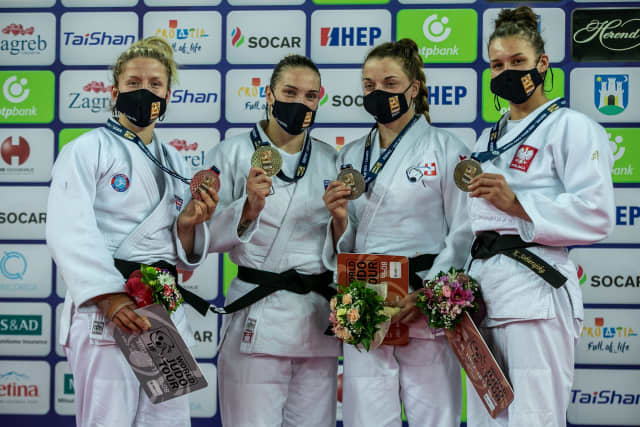 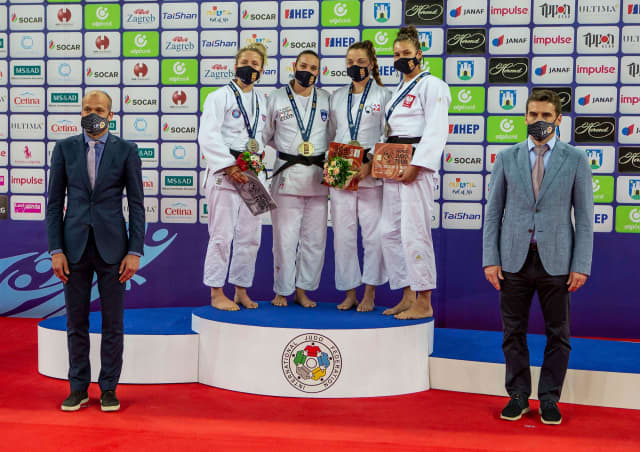 Medals and flowers were presented by Mr Ruben Houkes, Director of the IJF Children Commission, World Champion and Olympic Bronze Medallist and Mr Kresimir Samija, Director General of the Directorate for Sports in the Ministry of Tourism and Sports

Tato GRIGALASHVILI (GEO) was undoubtedly the most eagerly awaited athlete of the category, if not of the whole competition. Competing alone, with no coach, the one who had so much hope associated with his name but at the same time so much pressure, entered his first match relaxed. That paid off as it took him only 11 seconds to put his opponent into orbit with an incredible ura-nage. The following rounds were almost as easy for the Georgian, who seemed to be untouchable. In the second half of the draw, another competitor impressed with his throwing and fighting capacities. Guilherme SCHIMIDT (BRA) showed great judo, promising an interesting final. 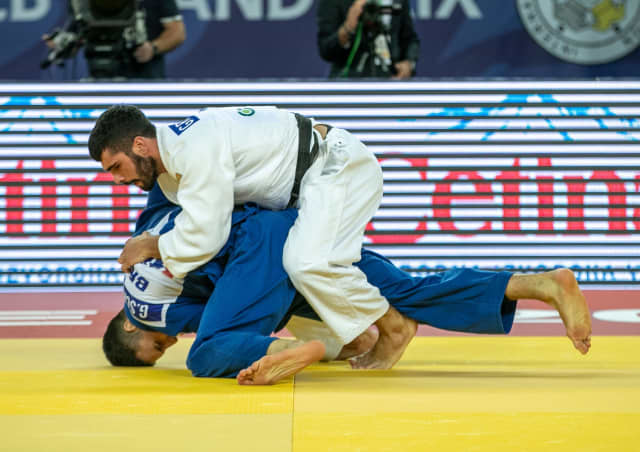 Tato GRIGALASHVILI quickly took the lead with a first waza-ari score from a counterattack but for the first time all day, the Georgian judoka had to pass more than two minutes on the tatami, with SCHIMIDT offering brave resistance. Actually the last minute and a half of the match was even difficult for GRIGALASHVILI, who was under permanent pressure from the courageous Brazilian. The latter was not afraid at all and GRIGALASHVILI had to stay really concentrated not to make any mistakes, a task he eventually completed, to win a deserved gold medal, that for sure will bring back some self-confidence. 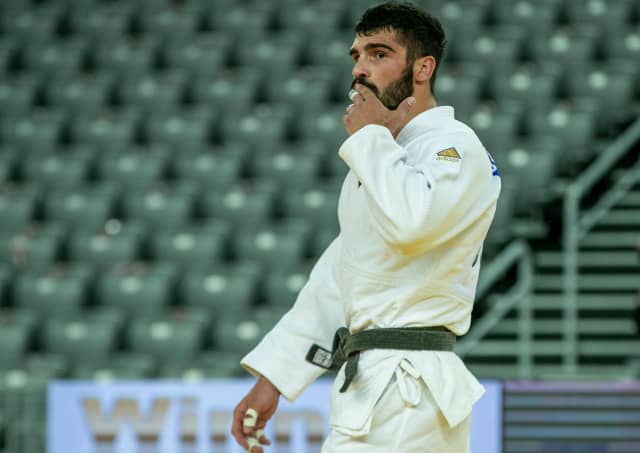 For the first bronze medal match, Baptiste PIERRE (FRA), a former medallist of the Paris Grand Slam and two times grand prix medallist Dorin GOTONOAGA (MDA) faced each other to complete the podium. The French competitor was never in a position to take the lead. Despite his coach telling him to wake up, that never really happened, even with an effort to make a small change in the rhythm at the end of the match. GOTONOAGA, who had already scored an early waza-ari, concluded with ten seconds remaining, with a second waza-ari to win the bronze medal. 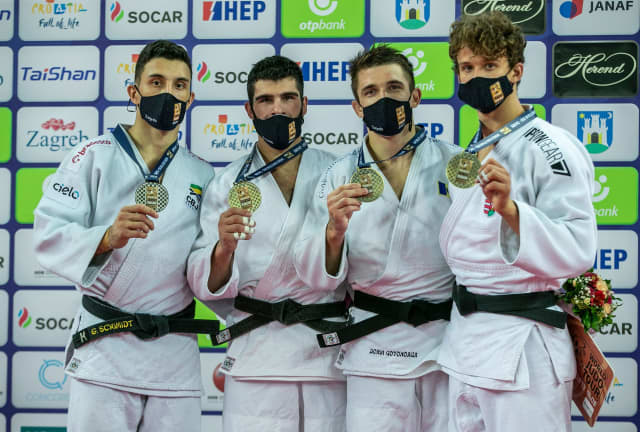 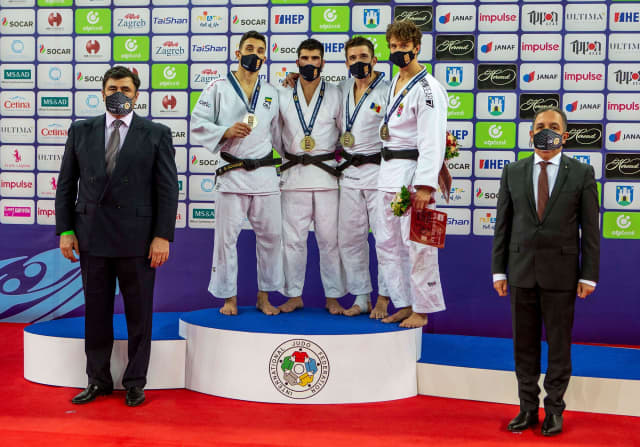 Medals and flowers were presented by Mr Armen Bagdasarov, Head Referee Director of the International Judo Federation and HE Mr Mokhtar Amine Ambassador of the People's Democratic Republic of Algeria in CroatiaKhelif