Four-time world medallist TASHIRO Miku (JPN) kept her remarkable unbeaten run against Olympic champion Tina TRSTENJAK (SLO) intact as the Japanese judoka has now won all 10 of their meetings. World number two TRSTENJAK trailed world number three TASHIRO by a waza-ari score from a o-uchi-gari and the latter offered a clinical finish on the ground with osaekomi to continue her country’s dominance in Germany. 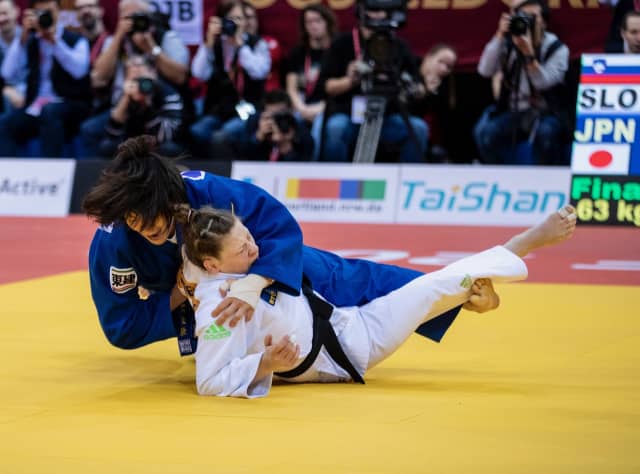 In the first semi-final TRSTENJAK held down world number 59 Manon DEKETER (FRA) with a tate-shiho-gatame to ease into the final. 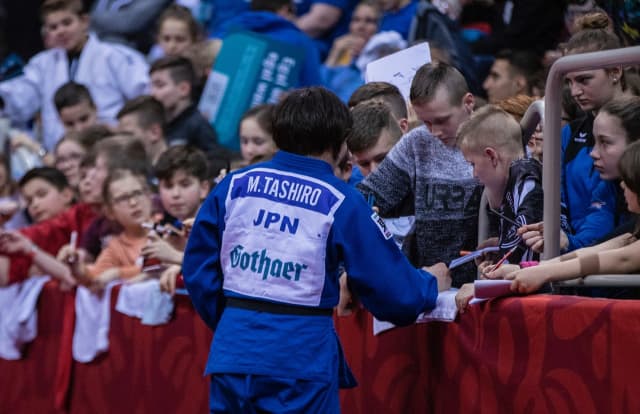 In the second semi-final eight-time Grand Prix winner Kathrin UNTERWURZACHER (AUT) was pinned down by TASHIRO with a yoko-shiho-gatame for ippon in just 40 seconds as the Japanese standout rushed into the final.

The first bronze medal contest was won by Abu Dhabi Grand Slam silver medallist Maylin DEL TORO CARVAJAL (CUB) who sealed victory over UNTERWURZACHER with a second waza-ari score seven seconds from the end. UNTERWURZACHER went behind to a waza-ari score from a hip throw and had to chase the contest which played into the hands of the Cuban who countered a desperate attempt from her opponent in the closing seconds in the first contest of the final block.

The second bronze medal was won by Asian-Pacific Championships silver medallist BOLD Gankhaich (MGL) after 67 seconds of additional time. DEKETER picked up her third shido for passivity and was dismissed which bolstered Mongolia’s medal haul in Germany. 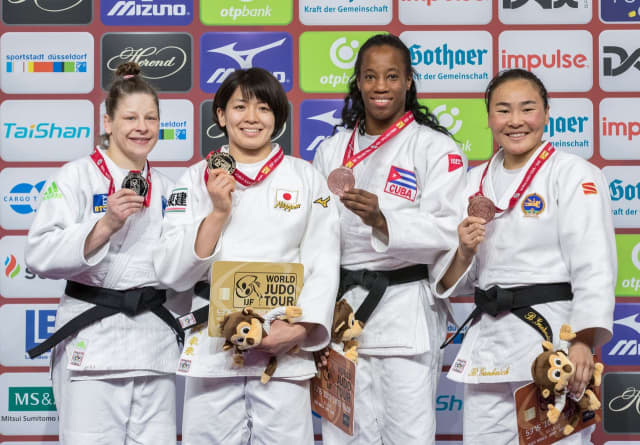 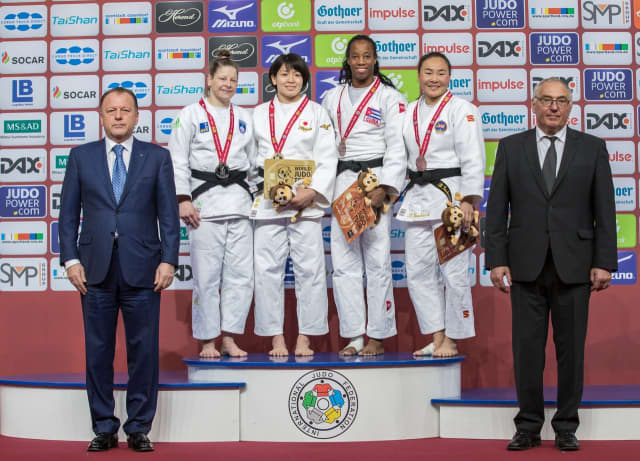 Former world champion ARAI Chizuru (JPN) defeated Cancun Grand Prix silver medallist Gabriella WILLEMS (BEL) to claim her seventh Grand Slam title. Despite an inspired display from the Belgian, ARAI found a route past the gutsy first-time Grand Slam finalist after one minute of golden score. After ONO Yoko won in Paris in scintillating fashion, ARAI needed to respond in Germany and did so with a professional display which ended in glory when she caught WILLEMS off guard with te-waza for a waza-ari score. 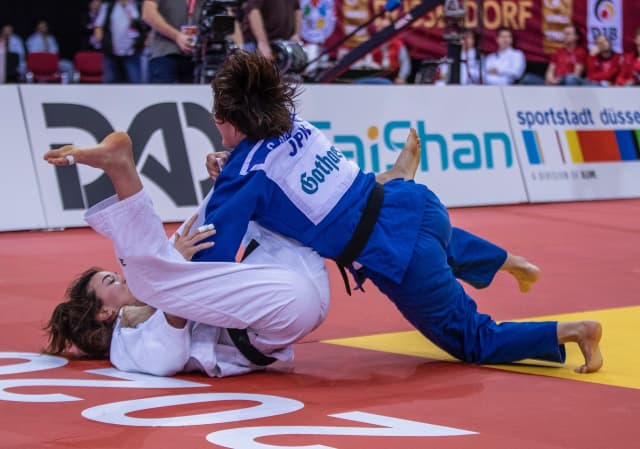 In the first semi-final Tel Aviv Grand Prix silver medallist KIM Seongyeon (KOR) was surprised by WILLEMS who caught the South Korean for a waza-ari and then held down the vastly experienced judoka with a tate-shiho-gatame to secure an expected place in the final. 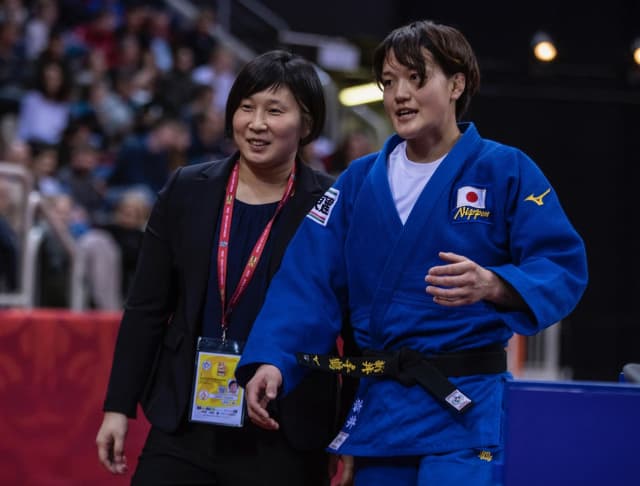 The first bronze medal was awarded to PINOT who had too much experience for Tel Aviv Grand Prix bronze medallist Ai TSUNODA ROUSTANT (ESP). French judoka PINOT profited from a string of errors by the 17-year-old Spaniard who was penalised for the third time for passivity in golden score as France hit the medal trail on day two.

The second bronze medal was won by Osaka Grand Slam bronze medallist Giovanna SCOCCIMARRO (GER) who capitalised on a mistake by KIM after 67 seconds of golden score. SCOCCIMARRO produced the stronger attacks but it was an error from KIM that led to the hosts claiming their first medal of the competition. KIM failed with a yoko-tomoe-nage as she went over for a waza-ari score and her German rival pounced on the ground to pin down the former for 10 seconds and a place on the medal podium. 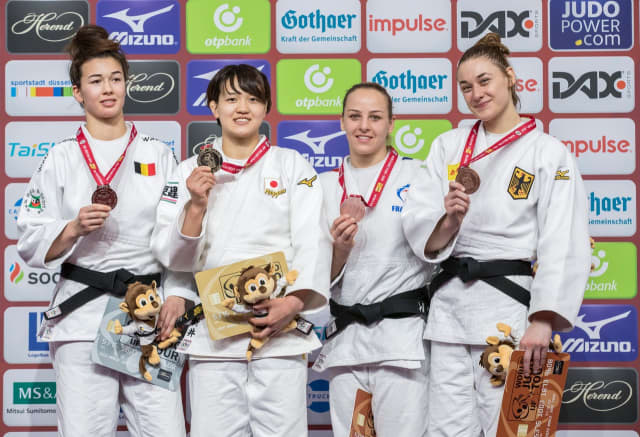 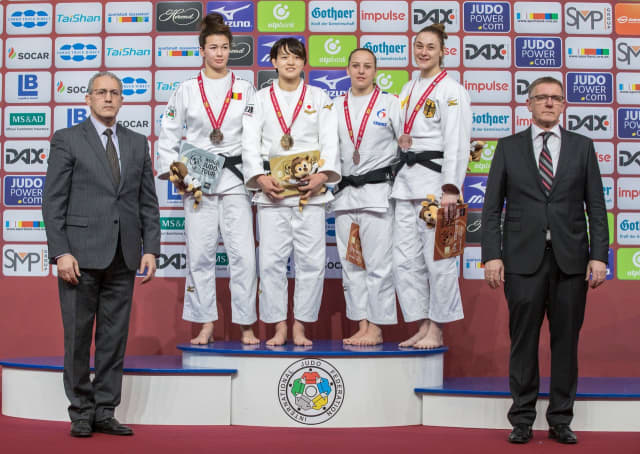 Olympic and world champion ONO Shohei (JPN) defeated former world champion AN Changrim (KOR) to win -73kg gold in the most anticipated category on day two. Tenri University superstar ONO clinched his fifth Grand Slam title as the 2019 world champion beat the 2018 world champion in a closely-contested final between two of the biggest stars in the sport. ONO, whose mere appearance in the field of play was met with a chorus of applause, successfully found a way through with his uchi-mata as AN slipped to his sixth defeat against his arch-rival in as many contests. A return to form by AN is a welcome sight for South Korea while ONO improved his winning-streak to 35 consecutive contests and looks untouchable as he plots an Olympic title defence this summer in Tokyo. 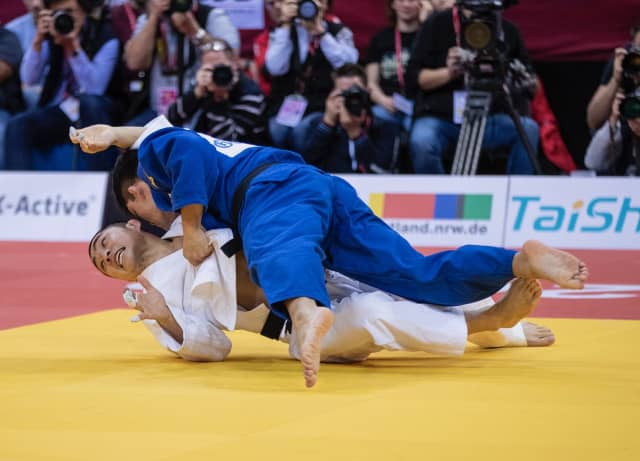 In the first semi-final Olympic silver medallist Rustam ORUJOV (AZE) was held down by AN for his second waza-ari score to the disappointment of the well-travelled Azeri fans who were in good voice earlier in the day. 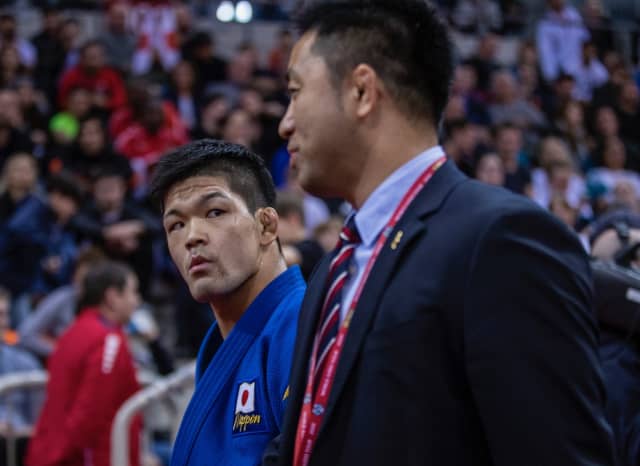 In the second semi-final ONO waited for his moment and launched European Games winner Tommy MACIAS (SWE) up and over with his lethal uchi-mata for ippon with 54 seconds left on the clock.

The first bronze medal was won by Rio 2016 Olympian TSEND-OCHIR Tsogtbaatar (MGL) at the expense of MACIAS. The Swede attacked with a ko-soto-gake and was tied up with the Mongolian who relished that position and drove forward for an o-uchi-gari for ippon after two minutes.

The second bronze medal went to ORUJOV who rolled over Tel Aviv Grand Prix bronze medallist Martin HOJAK (SLO) for a waza-ari score. HOJAK had to receive treatment twice for a nose bleed and still acquitted himself but was never able to unsettle the Azeri ace. 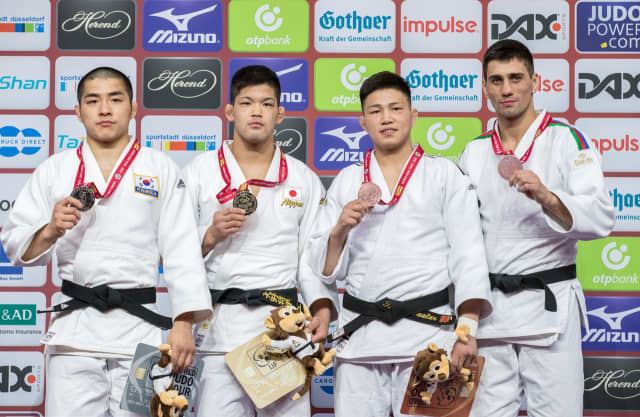 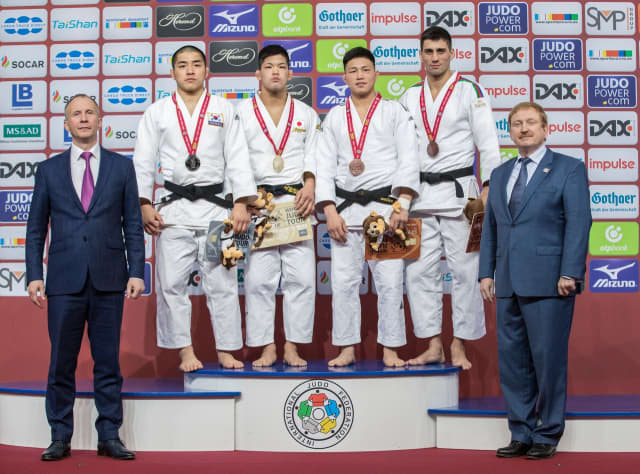 One-time Grand Prix gold medallist Tato GRIGALASHVILI (GEO) delivered a commanding victory for Georgia as the world number 18 toyed with the Olympic champion Khasan KHALMURZAEV (RUS) on his way to -81kg gold. The 20-year-old was unfazed by the calibre of his opposition in the final as the gold backpatch of the Russian only served to highlight just how impressive GRIGALASHVILI was despite being relatively raw at this level. A ura-nage by the Georgian earned a waza-ari score and there was no way back for KHALMURZAEV who was comfortably contained for the entire contest by his new rival. 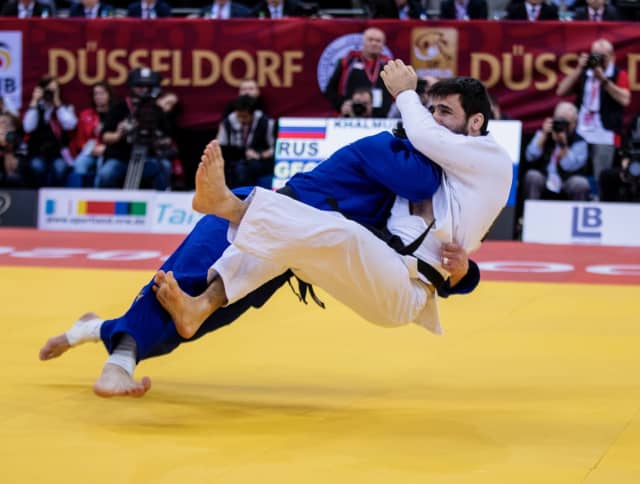 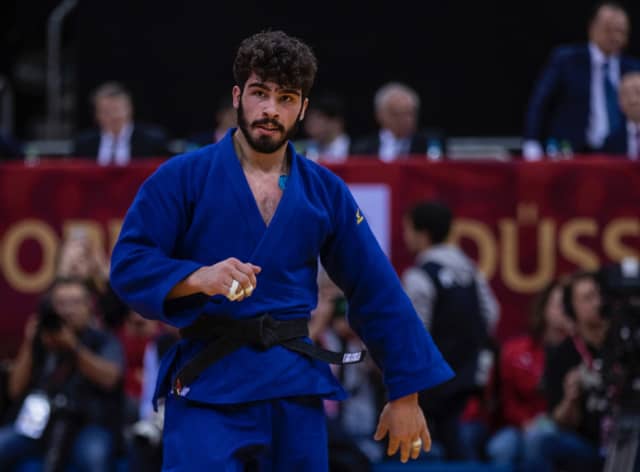 In the second semi-final GRIGALASHVILI threw Asian Games bronze medallist Vladimir ZOLOEV (KGZ) with a low seoi-nage for his second waza-ari score to move into the gold medal contest.

The first bronze medal was won by former Paris Grand Slam winner Frank DE WIT (NED) who produced the only score of the contest against ZOLOEV after 52 seconds of golden score. DE WIT threw ZOLOEV with a uchi-mata but the latter turned out and onto his front only for the Dutchman to follow through and roll his rival over for a waza-ari.

The second bronze medal went to PACEK who was the spoiler as he silenced the home crowd by defeating world number five Dominic RESSEL (GER) by ippon. After one minute of golden score the home judoka went all-out on the attack – as he searched for the German men’s team’s first medal of the event – but PACEK was braced and countered with a ura-nage for the maximum score. 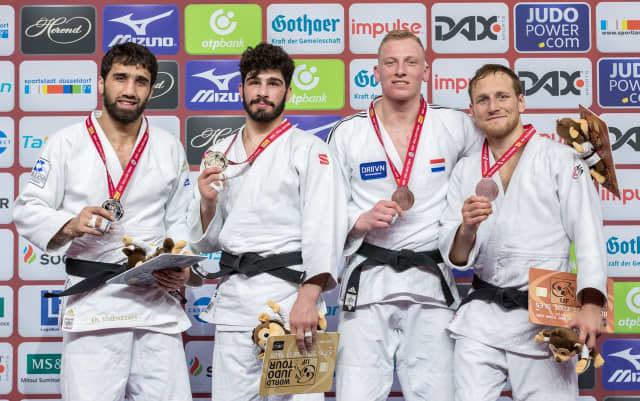 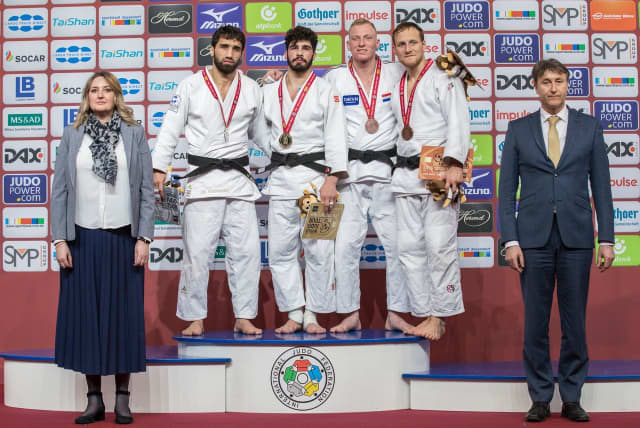