Written by Jo Crowley, Pedro Lasuen on 05. Nov 2021
Photographs by Emanuele Di Feliciantonio, Lars Moeller Jensen
Share
Someone is missing in Baku and his absence is noticeable. The missing man is Elnur Shukurov, a friend and colleague who passed away a month ago. The Baku Grand Slam is also an opportunity to honour his memory and remind ourselves of a great professional and an even better person. It’s a beautiful tribute because on this first day there was good judo and Elnur would have liked it. 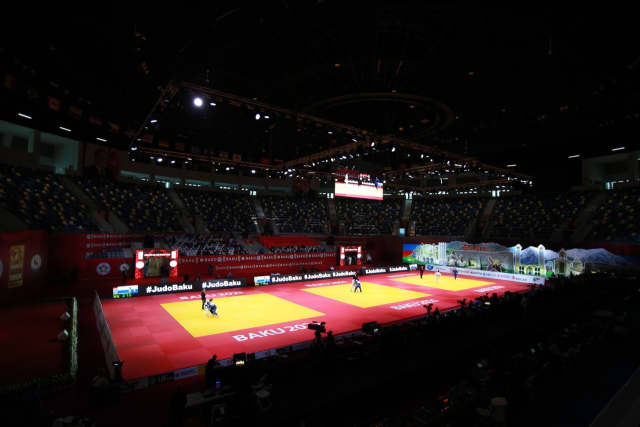 But first, the official ceremony, because without local organisation and sponsors there would be no judo, as the President of the International Judo Federation Marius Vizer said, it would not be possible to "promote unity and peace in the world through our sport" and so we must celebrate that we are here and judo continues. 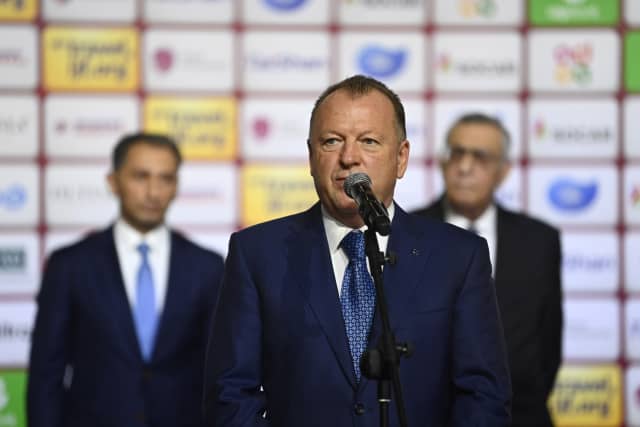 -48kg a Scuffle of Favourites

We have been warning skeptics for years that judo is an art, not a science and that anything is possible, no matter how impossible it may seem. In Baku there was a scuffle of favourites that confirms that no-one is untouchable, no-one wins by name and resumé. Take Shira Rishony for example; the Israeli was the favourite in Baku, number 12 in the world and with extensive experience. In her first contest she lost against Russian Daria Pichkaleva, number 90; thanks for coming and see you soon. Pichkaleva was, in turn, defeated by Austrian Katharina Tanzer, number 59 in the world rankings, who soon after lost in the final because, science or not, when there are Japanese on the horizon, things get much more difficult. 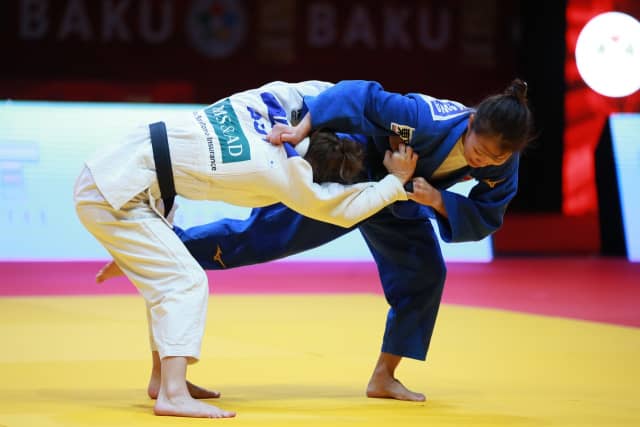 Tanzer stood up because there is nothing better than defeating the Japanese school to know that you are moving in the right direction. However, Rina Tatsukawa was far superior. The Japanese is ranked 119th in the world rankings, light years behind Tanzer, but she is Japanese and that says it all.

In less than a minute Tatsukawa dispatched the protégé of new Austrian coach Yvonne Boenisch with a super-smooth sumi-gaeshi.

With the gold medal already hanging around her neck, Tatsukawa expressed her "happiness for the title, which would not have been possible without the help of my coaches." 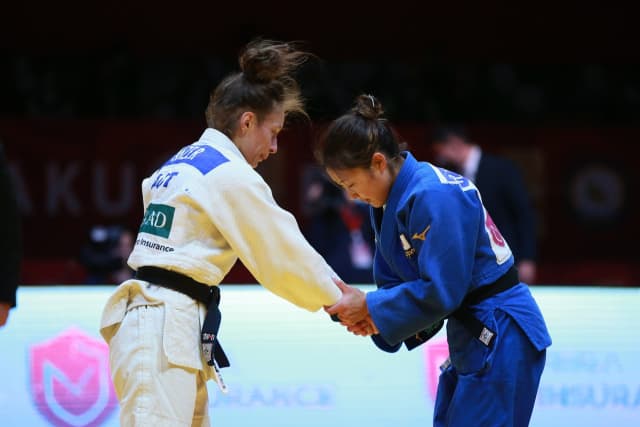 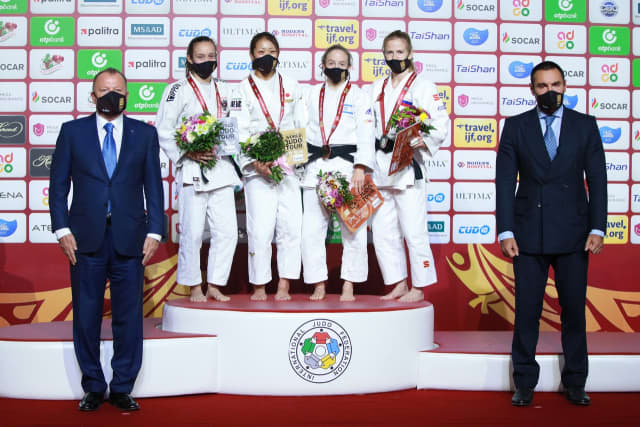 Medal, flowers and cheques were presented by Mr Marius Vizer, President of the International Judo Federation and Mr Azer Aliyev, Deputy General Secretary of The National Olympic Comittee of Azerbaijan 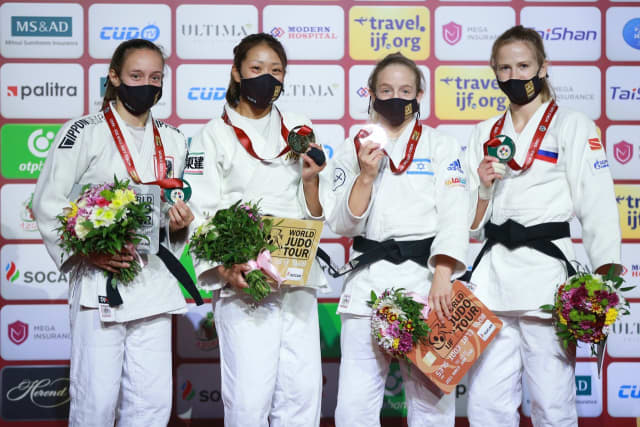 As for men, the lighter category was the only one that really respected the first two seeds. At the top, Russian Albert Oguzov reached the final with authority, defeating Azeri Rovshan Aliyev and Japanese Kondo Hayato in the semi-finals. Oguzov wanted everyone to know that today he was the boss. Below, Jaba Papinashvili did the same. A fight between a Russian and a Georgian is always something special, by style and history. They are clashes with stylish stories. Oguzov is a veteran of the circuit who still has enough quality to maintain an acceptable level and from time to time shine, as in Baku. Papinashvili is the new generation that has just landed on the planet of the World Judo Tour. 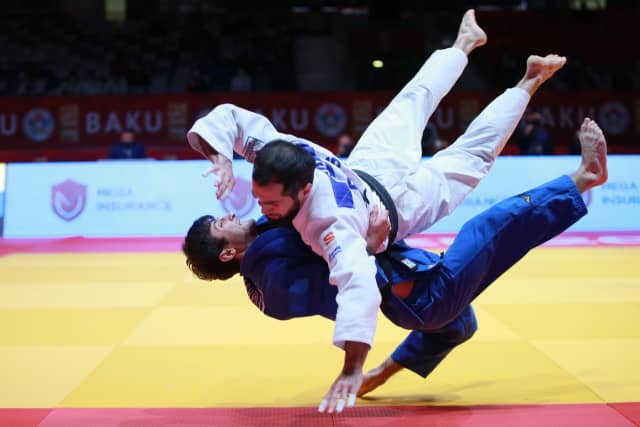 Papinashvili opened fire with a sode-tsuri-komi-goshi synonymous with waza-ari. Oguzov's reaction was immediate, with a juji-gatame that should have been the winning technique, but the Georgian knew how to escape and force the mate.

With two seconds to go, the Russian tried an o-uchi-gari but in the end, the boss was Papinashvili.

The boss’ first words were, “I worked very hard to get here. My aim was only gold and that’s what I got. I can say thay I am satisfied now.” 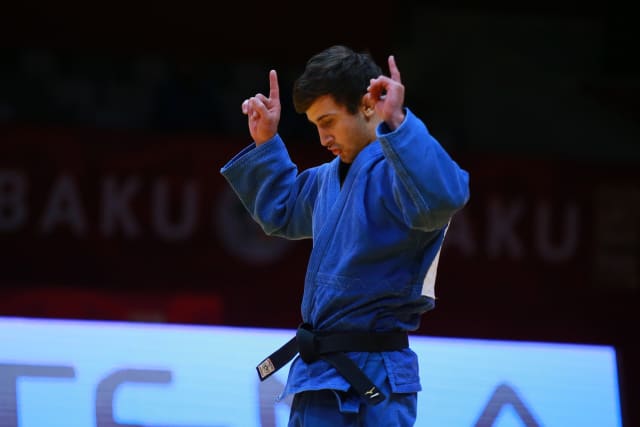 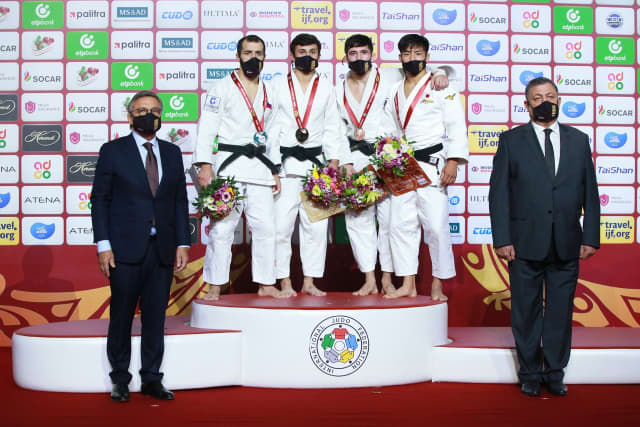 Medal, flowers and cheques were presented by Mr René Fasel, Life President of the International Ice-Hockey Federation and Mr Ismayil Ismayilov, Deputy Minister for Youth and Sports of the Republic of Azerbaijan 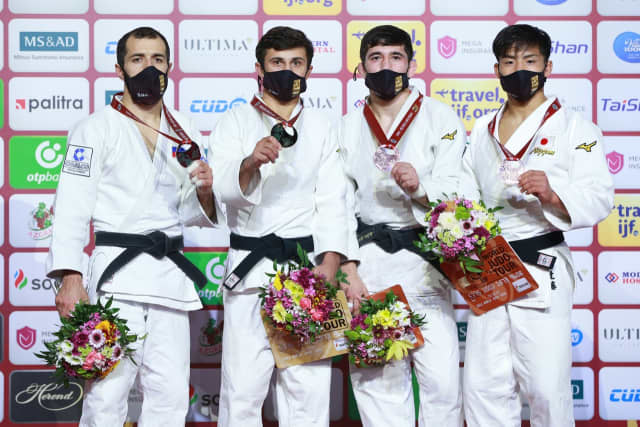 -52kg What it Takes to be Satisfied

On Thursday we told you about Distria Krasniqi, Olympic champion at –48kg in Tokyo, who has decided to return to the category she likes the most, the one that suits her best, according to her. We also told you that the Kosovar would have to monitor the British Chelsie Giles and the Hungarian Reka Pupp closely because anything is possible, but speculating on the results is not prohibited. It was Pupp who forced Krasniqi to take a reality check. The Hungarian won by ippon with authority, which means that Krasniqi still needs time to be as competitive as she was at the previous weight. It is also normal as it is her first tournament since Tokyo and she has a lot to refine; it’s nothing serious. Pupp continued on her way to the final. So did Giles. The Brit is having a sensational year with gold at the Tel Aviv Grand Slam, silver at the Tbilisi Grand Slam and bronze at the Olympics. In Baku she wanted to extend her winning streak by beating Pupp in a final between the two best fighters of the category but to wish and to do are not the same thing.

They reached golden score and it seemed that Giles was slightly superior. It just looked like it though, as Pupp won with uchi-mata from the ends of the sleeves, marking the Hungarian's first grand slam title. 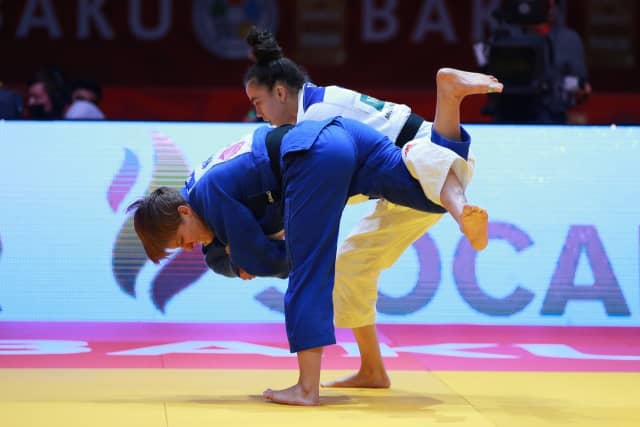 “I was really preparing mentally for the first match of the day and it was my hardest fight. I started today the same way I started at the Tokyo Olympic Games: facing an Olympic champion from Kosovo. Even though she came up from -48kg, she still has a big name and strong judo and I wanted to prove that I could do it again. Overall, I am very satisfied with my first competition in the new cycle, beating two Olympic medallists and taking gold.” 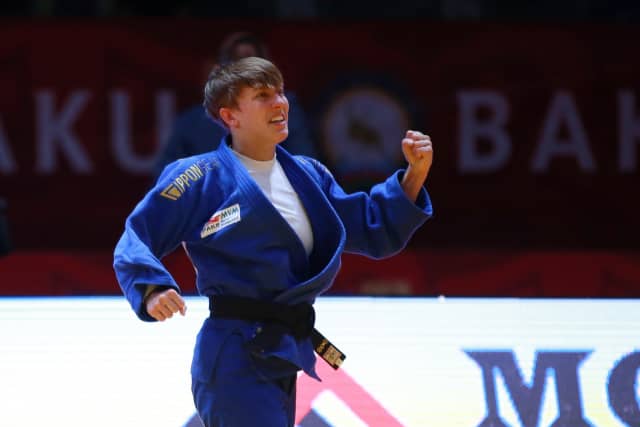 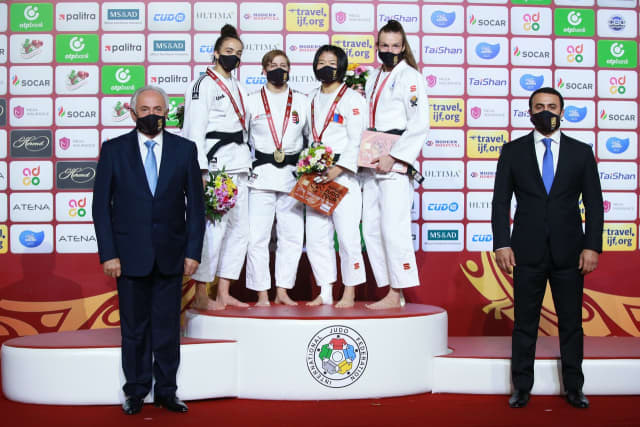 Medal, flowers and cheques were presented by Mr Vasily Anisimov, IJF Ambassador and President of the Judo Federation of Russia and Mr Farid Mansurov, Head of Sport Department at the Ministry of Youth and Sport of the Republic of Azerbaijan 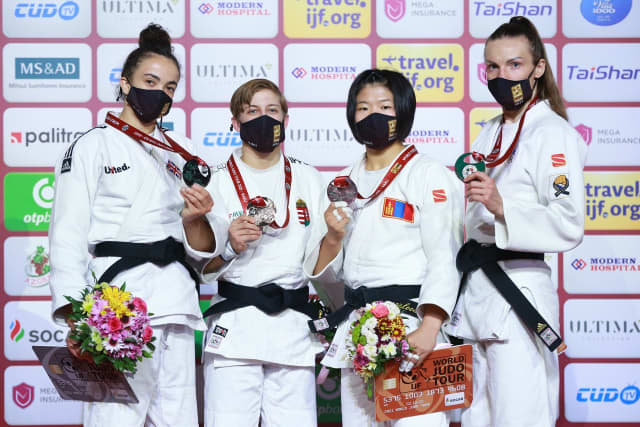 The second men’s category of the day was a version of the squid game. Attention everyone: the Georgian and number two in the world, Vazha Margvelashvili fell in his first contest at the hands of the Japanese Aida Yuji, who disappeared shortly after because of the Ukrainian Yevhen Honcharko, who was eliminated by the Azeri Orkhan Safarov, who in turn was faced in the final by the smartest in the neighborhood, the Moldovan Denis Vieru. Vieru is a true judo magician. His main problem is inconsistency. Capable of the best as well as the worst, in Baku he delivered the good part of a magnificent repertoire until the last contest. Safarov produced an impressive osoto-gake and won at home, his fourth gold medal in a grand slam. 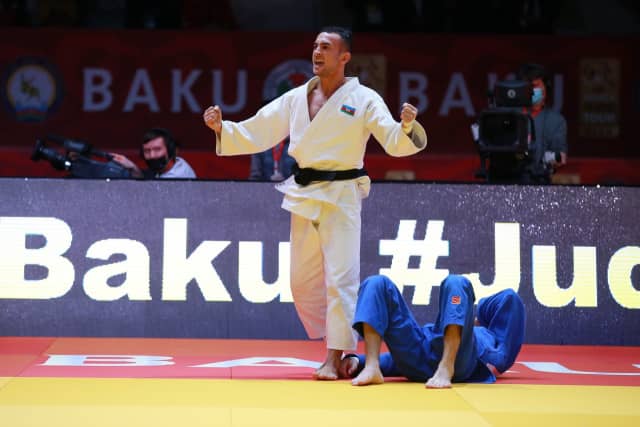 “I am very happy to win a medal at home; it makes this gold more special. I dedicate this medal to our country’s heroes. Today is our victory.”

The -66kg competition was delightfully chaotic because what seemed logical, just never was. 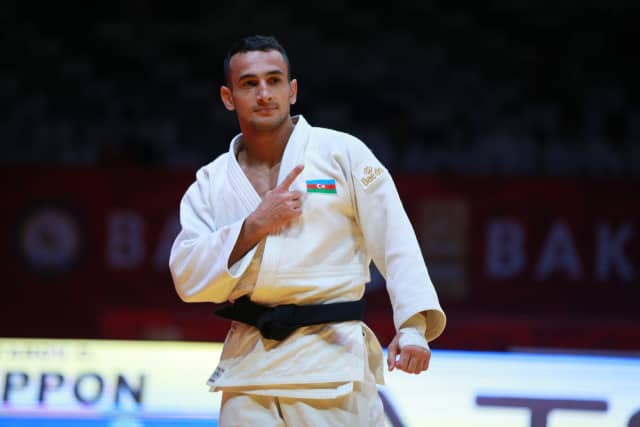 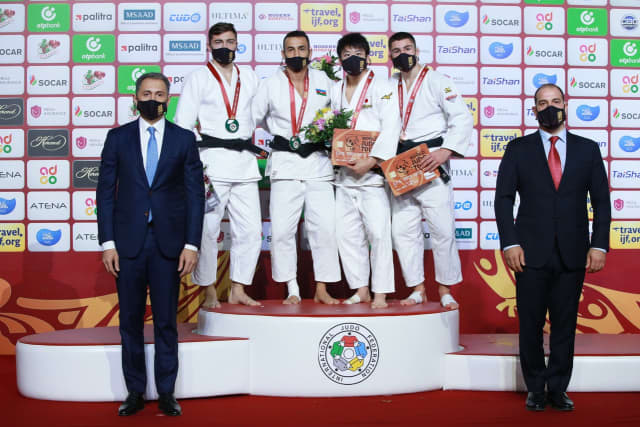 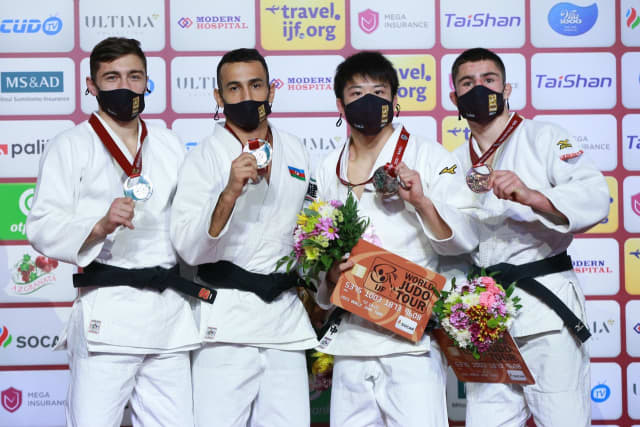 -57kg Silver was the Limit

Azerbaijan has invested time and money for years to build a women's team to be just as good as the men's and it is not an easy task. In Baku their women's team lived up to expectations. Shafag Hamidova reached the semi-final and fought for bronze at –48kg. At –57kg Ichinkhorloo Munkhtsedev qualified for the final. She is 23 years old, young and has a lot of room for progression. 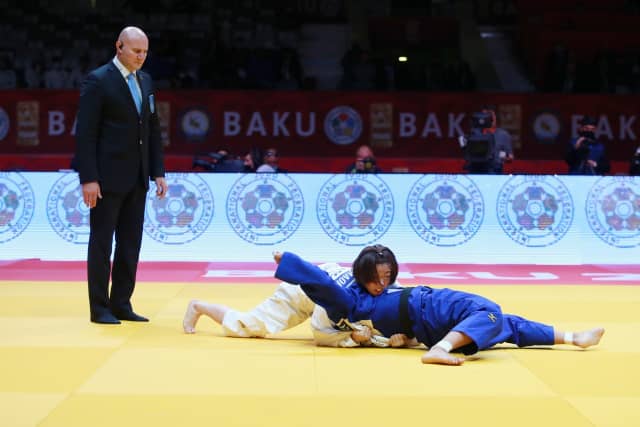 In Baku the limit was silver because in the final the Azerbaijani had to face Tamaoki Momo, and these are big words. The Japanese judoka is fifth in the ranking, world runner-up and has twenty medals on the international circuit. She is another level, the perfect test for Munkhtsedev; a test that lasted two minutes and ten seconds. Tamaoki won with osae-komi. In this final there was no surprise of any kind. 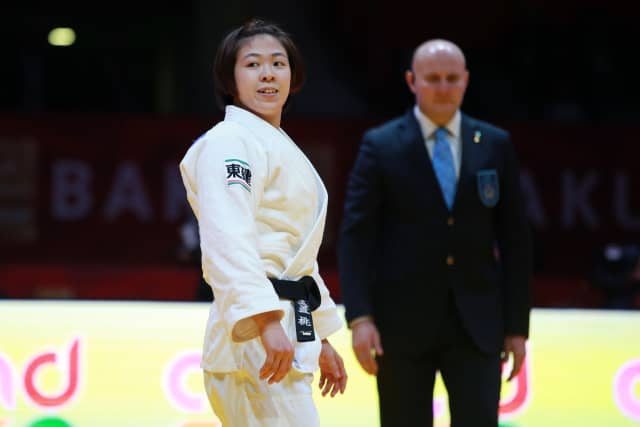 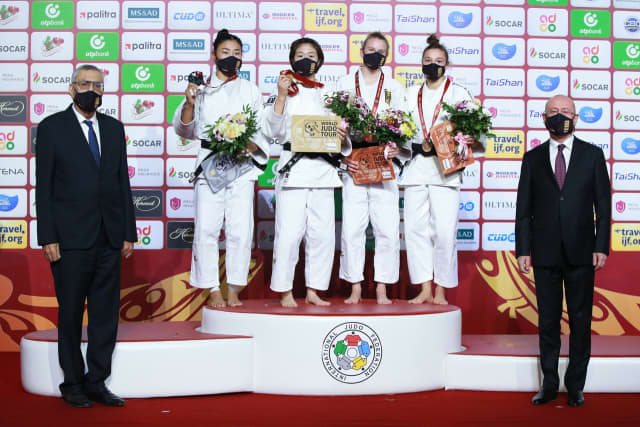 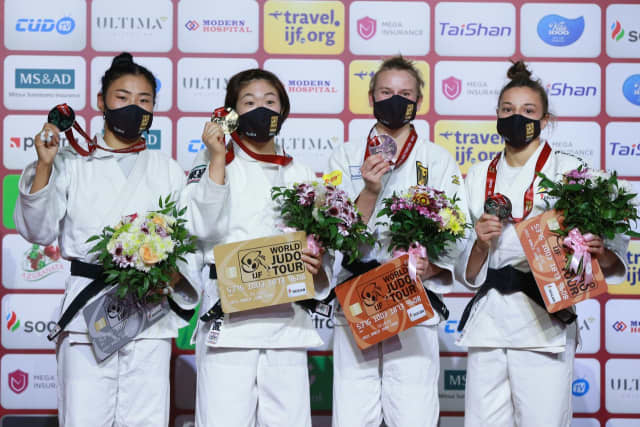 Japan leads the medal table and this is normal, but with only two gold medals, that is less normal. The news is that fourteen countries won a prize and that is a good deal.

In the end it was a day of judo, just that, a day full of surprises. Yes, surely Elnur would have liked to see it.