Written by Jo Crowley, Pedro Lasuen on 06. Nov 2021
Photographs by Emanuele Di Feliciantonio, Lars Moeller Jensen
Share
The second day of the Baku Grand Slam was like walking into a Wild West tavern, full of crooks, in the middle of a lawless territory where there is a new sheriff every day. 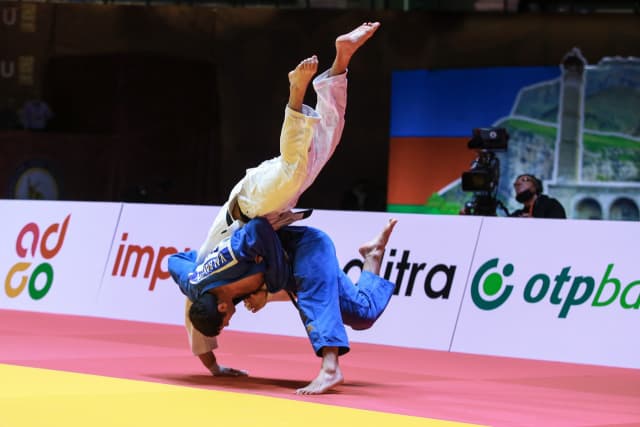 For Anriquelis Barrios, first seed, the badge lasted three minutes. Sheriff Wanted, the signs read and Gankhaich Bold appeared. She came from Mongolia, dismounted from her horse and challenged all the gunwomen in the place to a duel. Then the legend of Bold was born, the fastest in the place. In the final, Bold faced Lucy Renshall, who had come from raiding the silver in Paris; duel in the shade for the gold of Baku. Bold is 26 years old and has no medal on the World Judo Tour. Lucy is 25 and has 8 medals. It seemed an uneven opposition. 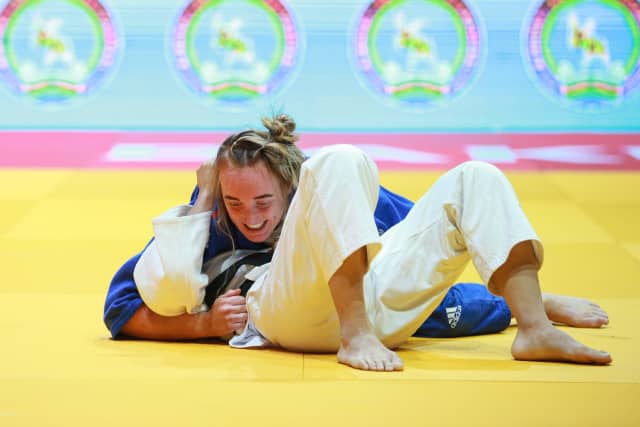 Both were extreme, playing at the hips, so it seemed one of them would go big! The Mongolian was taking several seconds to re-focus at the end of each exchange. In golden score Renshall claimed the badge as a new sheriff this way: the Mongolian attacked with uchi-mata but left too much distance, space for Renshall to apply her customary transition and she did so perfectly, winning the contest by osae-komi.

“I feel very strong in ne-waza. The fight was pretty long and it was a great moment to catch. She was tired and I could hold her down for that osae-komi. I feel great.” We understand why, she is the new sheriff. 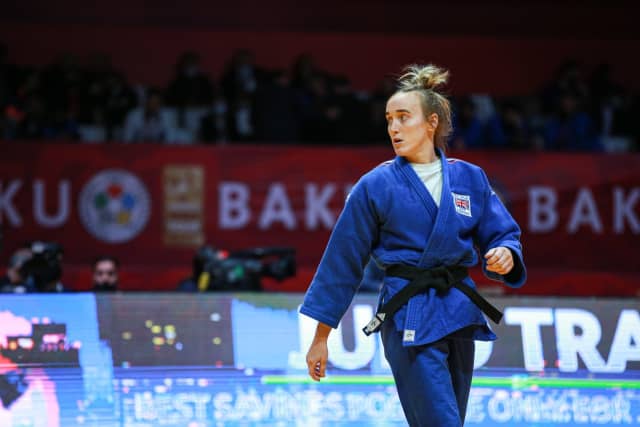 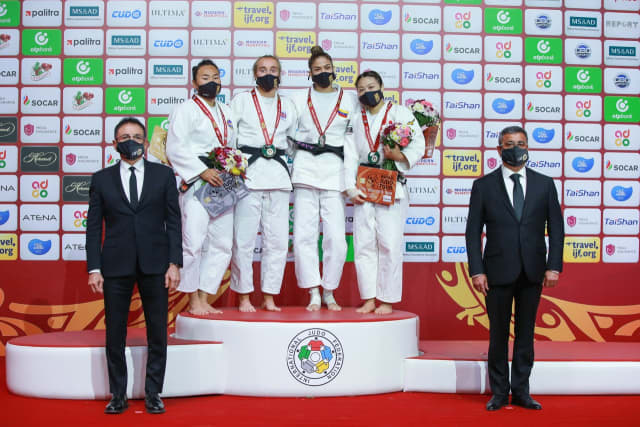 Medal, flowers and cheques were presented by Mr Madat Guliyev, Minister of Defence Industry of the Republic of Azerbaijan and Mr Sadig Sadigov, Executive Committee Member of the National Olympic Committee of Azerbaijan 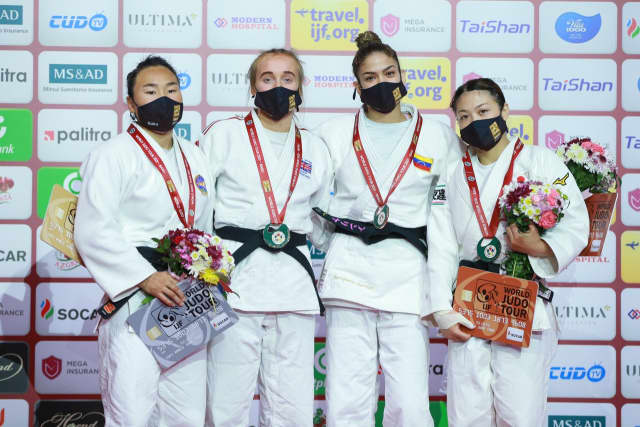 The Rustam Orujov and Hidayat Heydarov thing was like the disaster of the seventh cavalry regiment. Both lost their scalp at the hands of the new masters of the place, the Japanese Ken Oyoshi and the Russian Makhmadbekov. Oyoshi has just arrived on the circuit, hardly anyone knows him, but he has come to Baku as if he were Billy the Kid. The Russian is even younger but he has already won a Grand Slam and competes like a veteran with the energy of a youngster. The two won all their matches and measured forces in the grand finale. 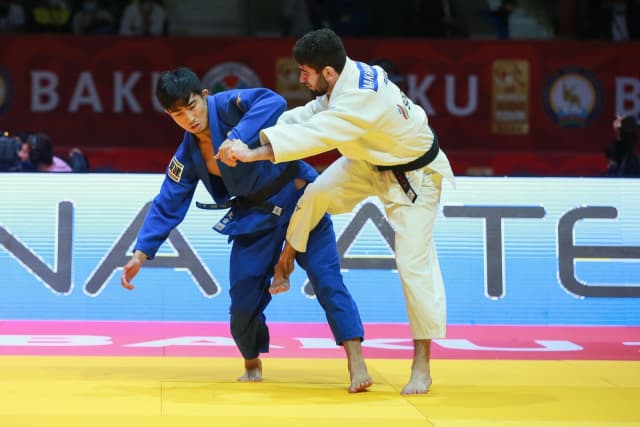 Oyoshi tried an uchi-mata that could have been magnificent. Makhmadbekov responded with excellent work in ne-waza but they were both futile attempts. It was necessary to go further because they were already in golden score and both playing defence, so much so that in the end the Japanese lost by hansokumake and Makhmadbekov pocketed a second gold at a grand slam and said, “There is no secret to winning. I just work hard. As the rivalry is very big in Russia, I couldn’t make it to Tokyo. Now, the only option I have is to win and get the gold in Paris 2024. Gold in Kazan and here is good evidence that I am on the right track.” 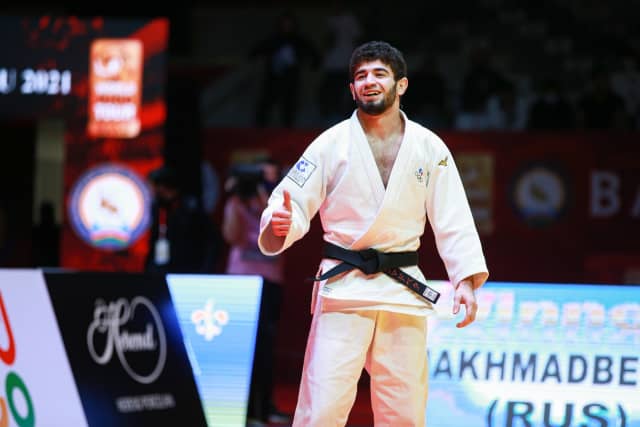 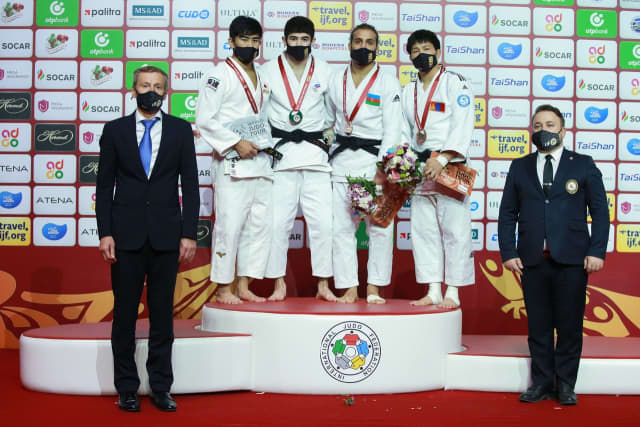 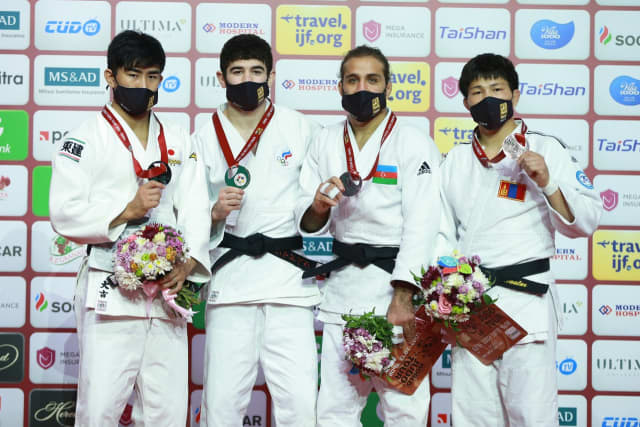 Wow! With the new cowboys, what intensity, what a great expenditure of sweat! We are going to pause in the middle of the film, very briefly, to catch our breath and incidentally offer a well-deserved tribute. The President of the International Judo Federation, Marius Vizer, presented Mr Sadig Sadigov with the prestigous Herend porcelain statue of Jigoro Kano, for his commitment and dedication to the development of judo in Azerbaijan. 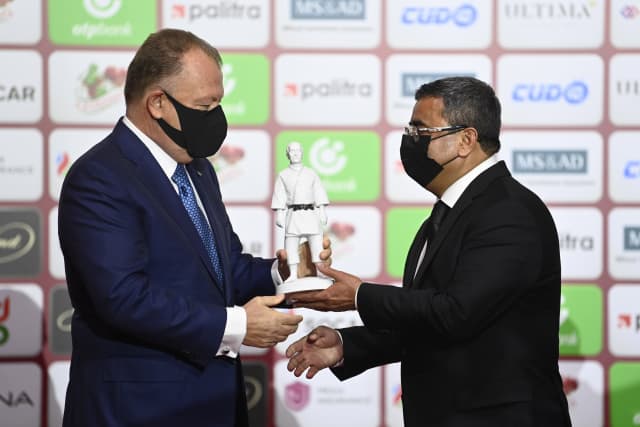 President Vizer then did the same for Mr Nijat Shikhalizada, for his highly decorated career, including 15 medals on the World Judo Tour and a world championship medal. He continues to be a great ambassador for young athletes in Azerbaijan. 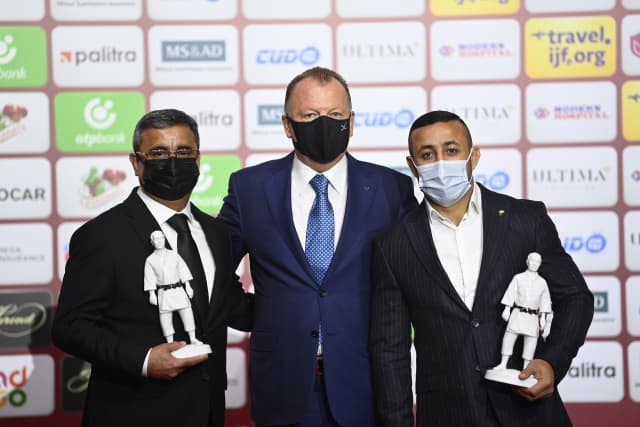 Back to the film

The –70kg category was an SOS call for the youth, as if there was no room for those over 23 years of age. If it was a question of checking the state of health of the quarries, now we know that there is a future for a while. The Japanese Utana Terada had not won anything on the WJT because she had never participated in any tournament at this level. The Croatian Lara Cvjetko had attended some events without major results. She is still a junior and there she has become well known, especially via a silver at the Olbia World Championships. 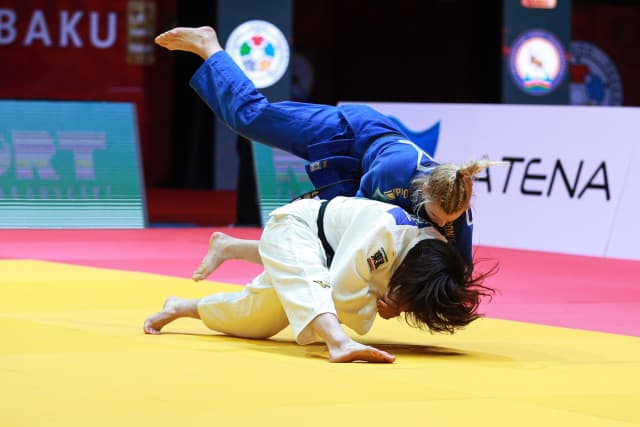 For this one better not to be late because in less than minute Terada produced a left tai-otoshi with both grips on one sleeve. First grand slam and first gold medal, four contests and four wins by ippon; she is so far Mrs 100%. 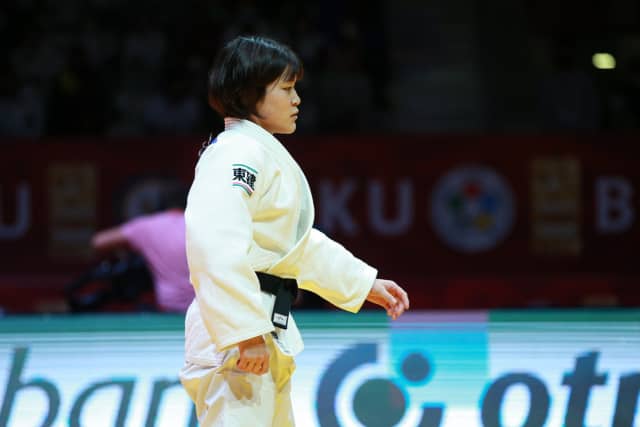 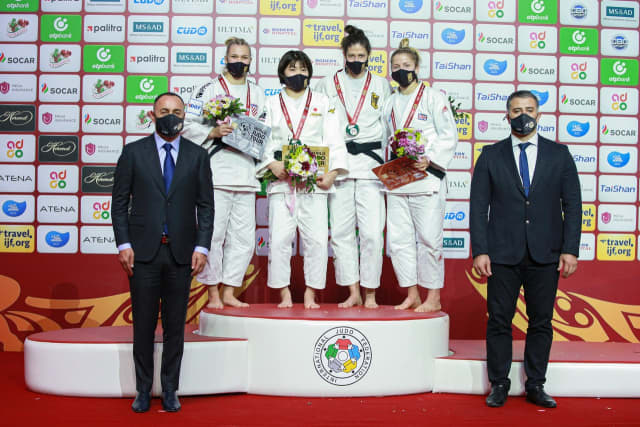 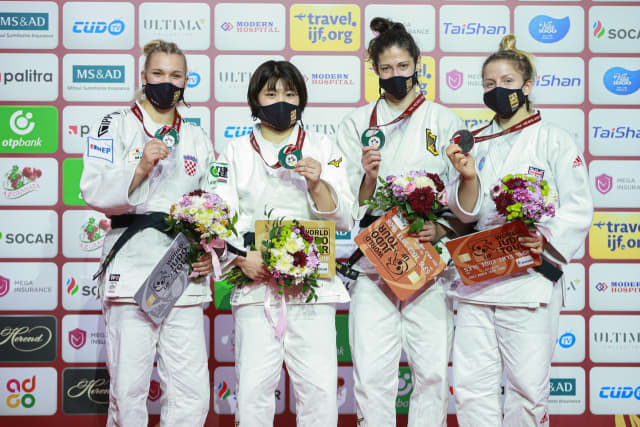 Croatia has decided to move to Azerbaijan. In addition to Cvjetko, Dominik Druzeta also sneaked into a final, as if title-hungry Croats travelled together like a gang of outlaws. However, to be the new sheriff, Druzeta had to disarm Vedat Albayrak, a kind of John Wayne in Baku, unflappable and flawless in each and every one of his duels, all of a high level, against Uzbek Tursunov, Azeri Hajiyev and the Canadian Gauthier-Drapeau. 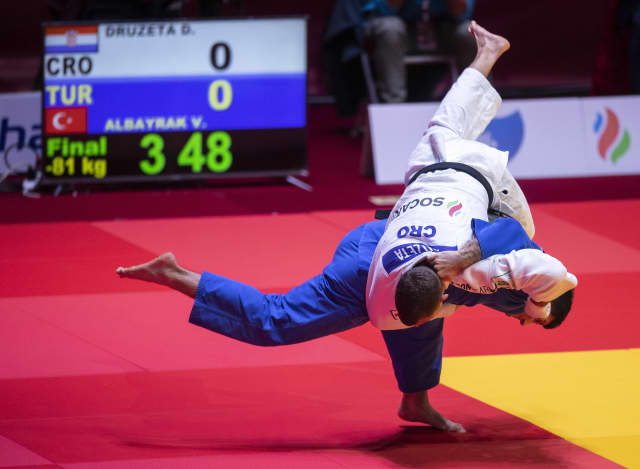 Now we know that the fastest in the Wild West is Turkish. In fifteen seconds Albayrak did utsuri-goshi without moving his opponent’s leg out of the way. His name is Vedat but in Baku he was the Patt Garrett of judo. 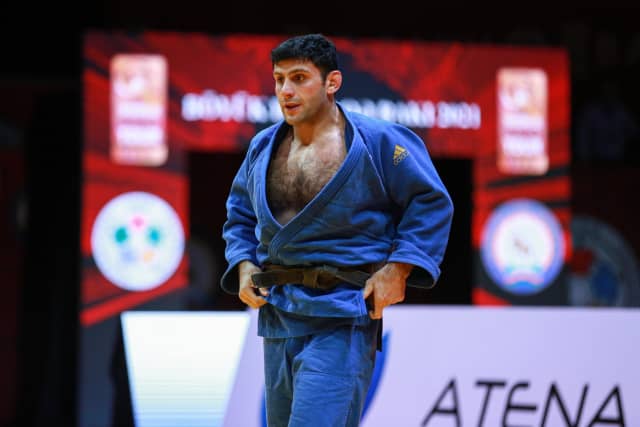 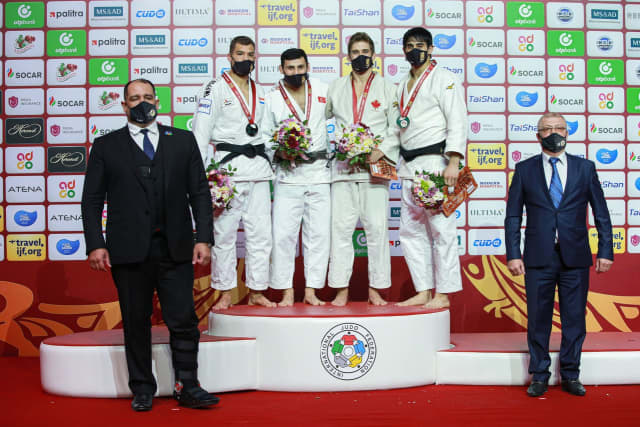 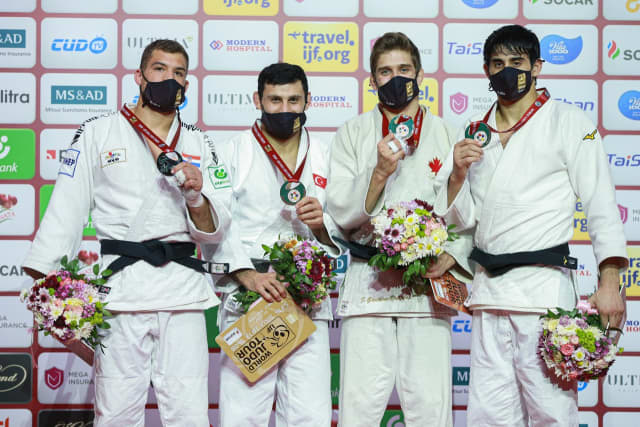 Finally, it is not that we like to repeat ourselves when talking about the medal table, but when 17 of the 29 countries present in Baku obtain a medal in the first two days, that means that things are being done well not in a few countries but in many, in more and more and that is also breaking news because it means more sheriffs are galloping into town.