By Nicolas Messner on 30. Dec 2018
Share
While the sports season was in full swing, the International Judo Federation continued to promote the educational values ​​of judo on five continents, through its many development programs, including Judo for Children and Judo for Peace, having as leitmotif gender equity and mutual respect. 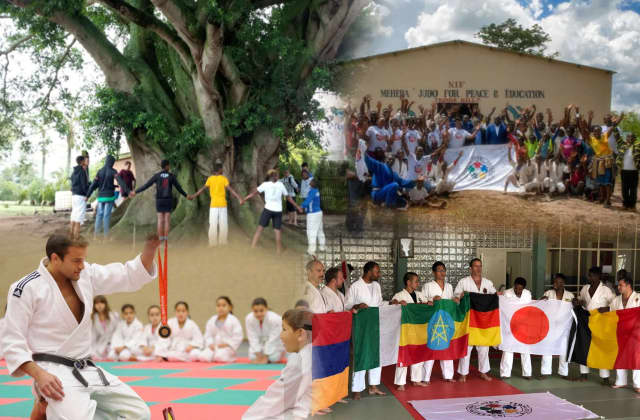 Like the projects launched in the Kilis Refugee Camp in Turkey or Meheba in Zambia, in January, a new judo for peace programme was initiated in the Dzaleka refugee camp in Malawi (https://www.ijf.org/news/show/judo-is-our-right), where thousands of displaced people from around a dozen African countries are piling up.

One of the highlights of the year in terms of developing and promoting judo values ​​was the Judo Educational Tour through Iran (https://www.ijf.org/news/show/persian-magic) of which Gevrise Emane (FRA), triple World Champion and Olympic medalist, as well as Ungvari Miklos (HUN), world and Olympic medalist, were able to discover the Persian treasures. For two weeks, the IJF team of experts and champions travelled the country and met with hundreds of judokas, men and women, to showcase the foundation of judo for building a more just society.

This very successful tour was the subject of a film from the Judo for the World series:

A few weeks later, Azerbaijan hosted the IJF film crew for the production of a Judo for the World episode, which promoted the World Championships held in September 2018. On this occasion, Elnur Mammadli, Olympic Champion in 2008 and national hero, explained what his title had changed in his life, while he was inspired by the first Azeri Olympic Champion of the history, Nazim Huseynov, now head coach of the national team. During this trip to the heart of the Caucasus, we also met the legend, Ilham Zakiyev, double gold medalist of the Paralympic Games, who explained how judo helped him overcome his blindness, after being seriously injured during the war. The stories of these extraordinary champions are true sources of inspiration for generations to come. The three men also joined the IJF Hall of Fame at the Gala that preceded the World Championships (READ THE STORY).

A little later in the season, Argentina, which was getting ready to host the Youth Olympic Games, was in the spotlight of the Judo for the World series. From Buenos Aires where the World and Olympic Champion, Paula Pareto, who’s also an orthopedic doctor, and still in the race for an Olympic qualification in Tokyo 2020, is established, to the extreme south (Ushuaia) and the confines of the Iguazu falls, the film describes the daily life of young judoka who all dream of becoming the next Paula Pareto.

During the summer, IJF held a youth training camp for all the participants of the Youth Olympic Games: READ THE STORY, that was a huge success and that allowed to spread the judo values among the young generations of future champions.

On the eve of the Youth Olympic Games, the IJF participated in the International Olympic Committee's 'Olympism in Action' Forum (READ THE STORY). President Vizer took the opportunity to make announcements on support for refugees, while Ruben Houkes and Nicolas Messner presented all of the IJF's development work to an audience of prominent figures from the international sports world.

Watch the film made in Argentina:

Before that, during the summer, a second episode of the series 'The Art of Judo' was shot in Japan, the cradle of our sport. This film dedicated to the passion of youth for judo gave featured a remote community that despite the remoteness does everything for the well-being of young people, while around Fukuoka, Akira Sone, continues to train for one day to become the +78kg Olympic Champion. The IJF followed her at the Kinshuki School Tournament, where Legend Yasuhiro Yamashita, now President of the All Japan Judo Federation was interviewed. The summer months in Japan are devoted to traditional festivals. The opportunity was perfect to meet Akiko Amano, CEO of one of the largest fireworks company in the archipelago and an international referee. She explained about the role of women in sport.

Perhaps one of the most moving moments of the year was the discovery of the program led by Gianni Maddaloni, who, in the heart of the Scampia suburb (Naples), put in place a program to help youth threatened by violence and drugs. Founder of the program and father of Pino Maddaloni, Olympic Champion in Sydney in 2000, Gianni opened his dojo and his heart to tell how much judo can have a positive impact on an entire neighborhood.

The Baku World Championships, which saw 14 World Champions crowned, were also the scene of a major first, with the first ever conference on gender equity in judo, led by Dr. Lisa Allan, a member of the IJF Executive Committee and Director of the Gender Equity Commission (READ THE STORY). Following fruitful discussions, representatives of national federations returned to their respective countries with many new ideas in mind. One of the first countries to apply this was Pakistan (READ THE STORY) which organized in the stride of the conference a competition for girls and boys in Khyber Pakhtunkhwa province.

At the end of the year, a new episode of the Judo for the World series was shot in Canada's Far North and in Montreal, which will host its first Grand Prix in July 2019. The film will be released at the beginning of the 2019 season.

Throughout the season, the Judo for Children / Judo in School programmes continued to develop and structure under the leadership of Ruben Houkes. More than thirty National Federations have now signed cooperation agreements with the IJF for the implementation of this programme. New developments will take place in 2019. 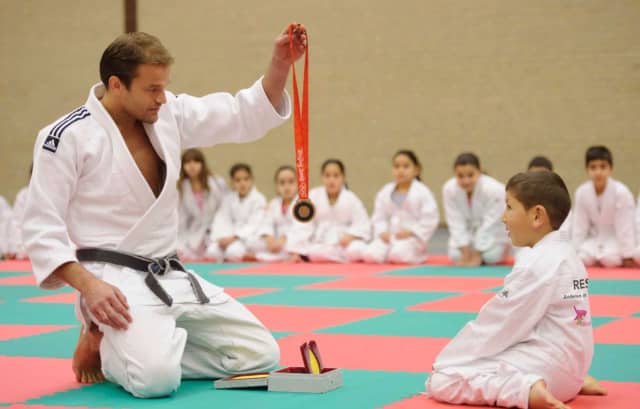 Ruben Houkes and the Judo for Children / Judo in School programme

An other impacting programme, based on the Judo for Peace values, is taking place in Ethiopia under the leadership of Hannes Daxbacher (READ THE STORY), who is also a member of the Military and Police Commission led by Stefan Marginean, which continued to develop its activities in 2018: READ THE STORY.

As part of the activities in South Africa, partnership was made with UNHCR, which allowed to send judoka to participate in an event in Port Elizabeth (RSA): READ THE STORY. This partnership was set up in the framework of the IJF's participation in the #WithRefugees campaign of the United Nations.

Not fare from there, the IJF started a programme in Namibia (READ THE STORY). 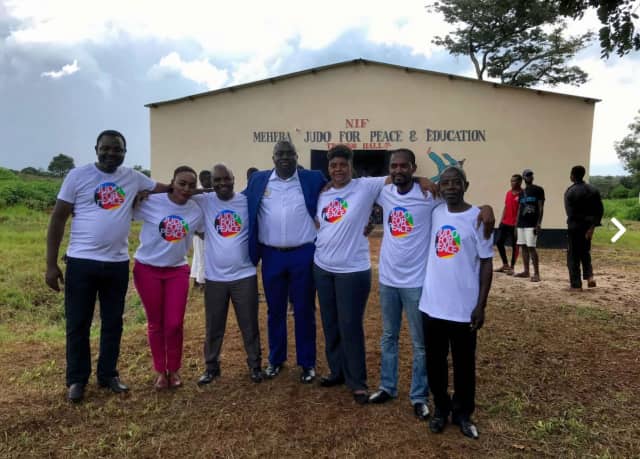 Still in the area of ​​promoting judo values ​​to help resolve conflicts and bring about a fairer society, in 2018, the IJF launched a Judo for Peace clothing ordering online platform: ACCESS TO THE WEBSITE. Part of the sales profits go to setting up programs around the world. One of the latest development and peace building efforts took place at the end of the year with the inauguration of the new Meheba Refugee Camp dojo in Zambia (READ THE STORY).

To develop judo is also to teach and to teach it well. For several years, the IJF has been a pioneer in this area, with the building of the IJF Academy led by Envic Galea and under the leadership of great champions. Thus during the summer the Academy was officially recognized as an autonomous high education institute (READ THE STORY). The Academy's training programs continue to grow at a steady pace on all five continents.

Finally, on October 28th, friendship was honored on World Judo Day. Organized since 2011, on the anniversary of the birth of the founder of judo, Jigoro Kano, this day allows any judoka to join the world judo family to promote the values ​​of our sport. All projects can be viewed HERE. 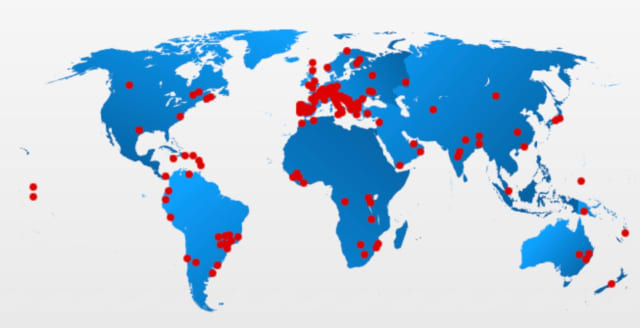 Finally, at the Abu Dhabi Grand Slam (READ THE STORY), all participants were able to take part in the tournament with all the attributes of their home country, including Israel.

This list of activities and projects is far from being exhaustive, because throughout the year many programs took place and many meetings to promote judo and its values were held, such as the participation of the IJF at the Crans Montana Forum in Dakhla (MAR) and Brussels (BEL). But it still allows us to have a glimpse of the impact of judo on the five continents for the benefit of all. 2019 promises to be just as exciting, maybe even more.